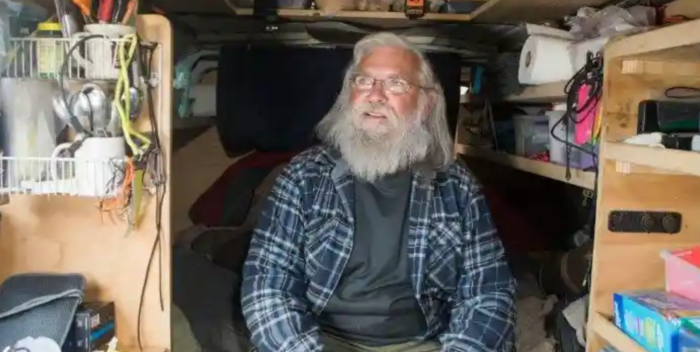 Bob Wells may live in a van and keep to himself, but when he met Frances McDormand he knew eexactly who she was.How do I know? I asked him today. So I was surprised when I just read in USA Today that McDormand, two time Oscar winner, thought he didn’t know when they made “Nomadland.”

Wells told me on Zoom Tuesday afternoon, “Of course I knew her. She’d just won the Oscar for Three Billboards.”

Well and his two other members of the Nomadland cast have been carrying the weight of “Nomadland” publicity because McDormand has been mostly AWOL. She didn’t even bother opening the lid of a laptop to participate in the Golden Globes Sunday night. I thought maybe she was ill. But a source close to her confirmed it’s just her famous prickly attitude toward awards and Hollywood.

“She’d be just as happy seeing someone from the new generation [win awards],” they said. And so it’s quite possible “Nomadland” will win Best Picture at the Oscars, but McDormand will not pick up a third gold statue. She doesn’t care. This will clear the way for Viola Davis or Andra Day or Carey Mulligan.

“Nomadland” is Chloe Zhao’s extraordinary film about life among not homeless but mobile homeful independent spirits thriving off the grid and away from conventional society. Wells, as well as all the others whom Zhao enlisted from real life for her take on Jessica Bruder’s 2017 non fiction book, including Linda May and Swankie, was a delight to meet today. He called McDormand — who was not on the call “regular people”–but he’s the regular people.

Wells says he’s starting to get inundated with emails and fan mail from people who’ve seen the people. He has a website called CheapRVLiving where he interacts with fellow travelers. Right now he’s staying in Oregon with family, where he’s needed. Otherwise he’d be back in the desert, he said. “It’s too cold to be up north.”

Aren’t all his other Nomadic pals missing him while he’s in Oregon, I asked? Just as he’s depicted in the movie, he’s kind of their leader. But Wells is a modest man. “I’m pretty much of a loner,” he said, unwilling to be labeled a Nomad celebrity. But what a lovely guy, who is immortalized now in this instant classic of a film.