Justin Bieber was supposed to be on a tour last spring and summer. Tickets weren’t selling at around this time of year. By March, the tour was in trouble, and was downsized in April. Then it was cancelled. The pandemic was used as the explanation.

Now it’s mid February again, and the 2021 tour isn’t selling. On Ticketmaster, for every date, the arenas are a field of blue. Floor seats have sold, but it’s unclear how much of that went to scalpers. The secondary market is very busy. But primary sales for two thirds of every venue are spotty for the first tier, second tier, and in some cases third tier.

There are a lot of tears, er, tiers.

Justin Bieber’s promoters may be the only people hoping for a return of the pandemic. They need an excuse if they’re going to cancel again.

It’s not like Bieber isn’t selling records. He’s had several hit singles. He’s also tried to drum up enthusiasm by doing various private streaming shows. But between his audience aging, and a general reluctance still this year for fans to pile into 20,000 seat arenas, the Biebs is suffering.

The thing is, his first show, on June 5th, in Glendale, Arizona, doesn’t look too bad. But two shows in a row in San Jose, California, are largely unsold for June 7th and 8th. And it goes from there. When Bieber hits the New York area on July9th at the Prudential Center in Newark, the show is light. Ditto the next two nights at Madison Square Garden, and then a night at Brooklyn’s Barclay Center.

There isn’t a show on the tour where you can’t get a decent seat at a decent price, frankly. And right from Ticketmaster, not Stub Hub. 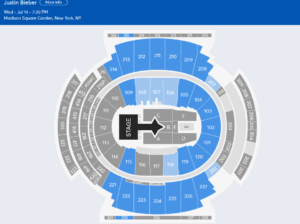 Nevermind that right now, Gov. Cuomo is only allowing 10% seating at indoor venues. So only 2,000 people can fill the Garden. Maybe by July it will be 50%. If that’s the rule, then Justin will be all right.

But look at July 3 in Bieber’s hometown of Toronto. Blue, blue, blue. 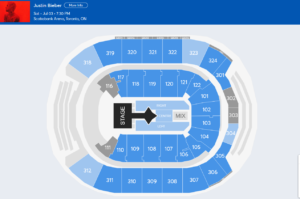 In Toronto, at ScotiaBank Arena, the floor doesn’t look bad. But the surrounding tiers are very empty. And there are many — many — rows of gold seats– premium tickets that come with meet and greets for extra money.