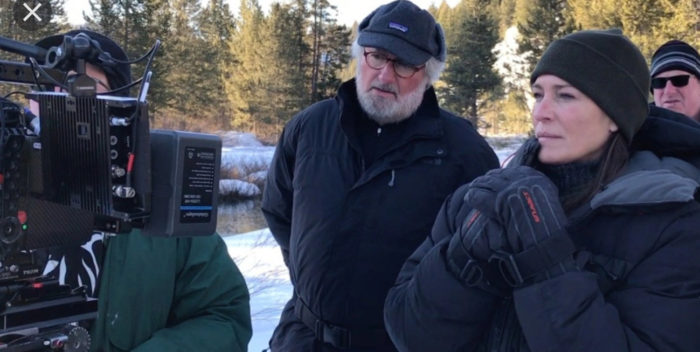 I’m a big Robin Wright fan, so there’s that.

But she chose “Land” to direct, Focus Features picked it up right away and Sundance took it as well. I see some reviewers are so in love with the idea of all this they’ve missed the problem. This “Land” is not your land.

Somehow Robin’s character Edee’s male model husband and gorgeous baby have been killed. She’s so bereft she’s bought a piece of property no one wants in the Canadian woods. This includes a shack without electricity and furniture. She brings her stuff and tells the caretaker to return her rental car, she doesn’t even want that. She wants to be alone.

I’m a city kid so these movies are not poignant to me. They are silly. The cinematography is beautiful– gorgeous woods and mountains and lakes. But now what? Robin’s character is a city kid, too, and she’s going to hunt and fish and make fire with two sticks because she’s grieving.

Well, we all grieve in different ways but there is no point to this set up. Eventually she makes herself sick. Lucky for her Damien Bachir and some native woman show up and bring her back to health. Now what? What have these people got against electricity? How will this possibly bring back the Marlboro Man and the kid? I didn’t get it. Plus, Robin has no food. So she’s hunting bears (yech) and trying to catch fish with her bare hands. She’s so contemplative she won’t go to the local supermarket.

I am cynical, yes. I can tell Robin Wright can direct. She’s smart. She has a good eye. But this material is a long cliche. Oh my god, a woman alone can survive! Is that it? I have no doubt she can survive. But why? It’s not like she’s forced to live there. She chooses it. And it’s impractical. And it doesn’t address the real drama of how her family died, or why. Also, sometimes Robin has dark brown hair and sometimes it has highlights.

Whether it’s a man or a woman, a survival movie has to have some greater point. And “Land” doesn’t. I’d like to see Robin Wright take on some juicy material. Did I miss something? Did Edee cause the deaths of her child and husband? I don’t know. Even if she did, everything about “Land” just seems self indulgent.

Maybe I’m annoyed because I suffered real tragedy this winter, and earlier in the year, with death all around me. I didn’t have the luxury of packing up for the Colorado Rockies to play Daniel Boone. I needed a dishwasher and indoor plumbing to get through it. So “Land” is clearly for someone who has time for this fantasy.