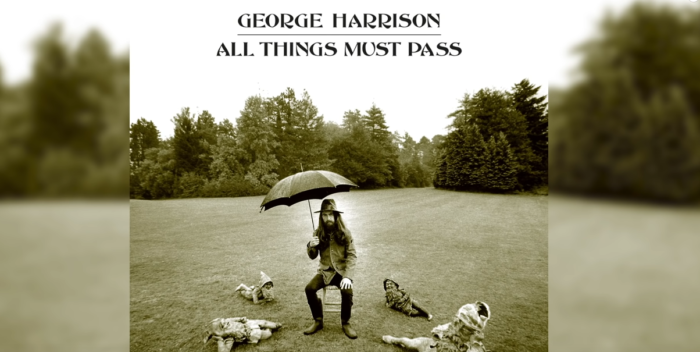 This weekend marks the 50th anniversary of one my favorite albums of all time, George Harrison’s “All Things Must Pass.” A real masterwork, “All Things Must Pass” was the first major album by any of the ex-Beatles. I can still remember buying the three LP box set (for a very expensive $12.99) at Korvette’s and clutching it until we got home. I had very heavy Koss headphones, and “My Sweet Lord” soared through them.

The title track was recorded for the Beatles originally but not released as a group track. It went on to anchor George’s release. Now Dhani Harrison and producer Paul Hicks are remixing–different than remastering– the whole album. They’ve started with this track. See how you like it. I think I prefer the 2014 remastering. The remixing makes the vocal sound a little strained and forward over the mournful instrumental. George was grieving the Beatles in that song. Who knows? Maybe I’ll get used to it.

Hicks also remixed the Stones’ “Goat Head Soup” box set this fall, and worked with Sean Lennon on the new John Lennon remixed “Gimme Some Truth” box set. I liked the former. I’ve only heard the latter on Spotify but it does sound bright and punchy. For Dhani and Hicks, the sonics of “My Sweet Lord” and “Awaiting on You All” and “What is Life” will really be the challenge. I look forward to hearing them.

No estate has done a better job than Dhani and his mom, Olivia, in preserving George Harrison’s legacy. The Harrisons are also releasing George Harrison’s “My Sweet Lord” on a 7” Milky Clear Single, individually numbered, exclusive to Record Store Day. This is a recreation of the Angola pressing of the 45 from 1970 with unique artwork. “My Sweet Lord” was originally released in November 1970 as a single, Harrison’s first as a solo artist, and topped charts worldwide; it was the biggest-selling single of 1971 in the UK. In America and Britain, the song was the first number one single by an ex-Beatle.