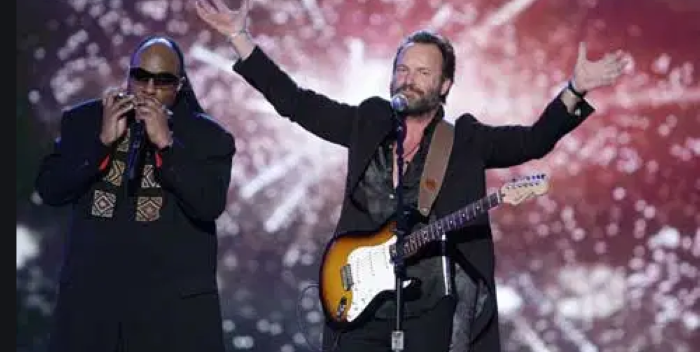 Barack Obama, our last real president, says in his new book that he doesn’t remember all Inauguration parties. So here’s a flashback to January 21, 2009:

Even though Barack Obama‘s Neighborhood Ball was beaten in the TV ratings last night by “American Idol,” it was without a doubt the hottest of the official inaugural events.

Stevie Wonder, Sting, Mariah Carey, Aicia Keys, Queen Latifah, Jay Z and Beyonce were just some of the performers who wowed the crowd of 2,000 or more former Obama campaign workers and residents of Washington, DC.

And there was plenty of Hollywood star power with Denzel Washington, Leonardo DiCaprio, and Jamie Foxx all hanging out backstage and introducing segments. Leo brought his dad, who took video footage on a minicam of the acrobat troupe that formed a human pyramid. Denzel took a large freight elevator to the stage with a costumed gospel choir. They sang to him and asked if he had a voice. “Not me,” he laughed. “My wife can sing. You don’t want to hear me.”

At the back of the elevator Sting, incognito in his brown beard, almost went unrecognized until one of the ladies gasped and the attention shifted.

Down in the dressing rooms – thin curtained partitions with card tables and couches – Sting and Stevie Wonder were next door neighbors. While Stevie practiced his harmonica riffs, Sting listened to an instrumental track of “Signed, Sealed, Delivered” for the big group superstar singalong.

Suddenly Stevie started playing along from his side of the curtain while Sting tried out the lyrics on his side. Then Stevie went into a jazz riff that stopped everything. It was an extraordinary moment, topped only by the pair’s show closer on Sting’s “Brand New Day.”

Meanwhile in the holding area, Alicia Keys greeted Queen Latifah. Their moms talked about how much they loved the women’s performances in “The Secret Life of Bees.” Latifah looked sensational in her gown. Sean Diddy Combs, dressed to the nines in a spiffy tux, lingered in a corner ,even though he wasn’t on the show. Later Latifah went up on stage with the moms to watch Alicia’s knockout performance of “No One” and took pictures with a beautiful nine-year old girl in a formal white gown. The mother was over the moon.

And then, of course, there was Mariah Carey with her young husband, Nick Cannon. The latter was perched above the stage where was deejaying, playing the songs that went with the artists. When Wonder finished his terrific new single “All About the Love Again” from the new Obama CD (on Hdden Beach Records), Cannon launched into a medley of Stevie’s classic hits.

Mariah meantime was glowing (but not pregnant) and very happy with her performance of “Hero.” “Was it ok?” she asked me when we ran into each other. Her next question was maybe more relevant. “Is Randy here?” She asked of pal Randy Jackson, our mutual friend.

Alas he wasn’t. Jackson was busy on “American Idol,” the ratings king, listening to “Gong Show” types. Something tells me he would have been happier here.

Hanging Out At The All-Star Obama Party
It was supposed to be an intimate affair but Arianna Huffington‘s gala last night in Washington was a wildly overbooked media bash for thousands.

They came to celebrate the inauguration of Barack Obama, and so they did, greeting the chiming of the clock at midnight as if it were New Years Eve. Huffington’s peeps handed out a ton of New Years Eve tchochtkes like hats and horns to make the most noise when the clock struck midnight.

At that point Sting had just finished singing “Brand New Day” and “Every Breath You Take,” as well as joining in with will.i.am on his remake of “Englishman in New York.” The Black Eyed Peas leader also performed a couple of his own hits.
Among the stars we saw were Robert DeNiro, Ben Affleck, Josh Groban, Demi Moore, Ashton Kutcher, Norman Lear, Rosie Perez, Gerald Butler, Marisa Tomei, John Cusack, Kerry Washington, Leigh Taylor-Young and kind of an endless list of bold face names who must read The Huffington Post blog site, or at least just wanted to be seen. The stars had total access, and the result was a hot mix of Hollywood and politics that only Huffington could pull off.

Things were a little different this morning—Tuesday—as some stars made it in to the swearing in and some didn’t.

The crowds were so huge and the disorganization of security so massive that thousands of ticket holders were kept from seeing or hearing the Obama swearing in. I ran into actress and writer Anna Deveare Smith, an Obama supporter, who simply gave up rather than brave the bone chilling cold. Dana Delany hunkered down at a brunch where other luminaries watched ceremony in safety and warmth.

More to come … stay tuned tonight as the A-list really rolls out the red carpet. But some are wondering why it’s Beyonce and not R&B legend Etta James who’s singing the Obamas’ favorite song, “At Last,” tonight to the First Couple. James is alive and well, and it’s her hit the Obamas have swooned to all these years.
The White House needs a director of music, I think—a new cabinet post!