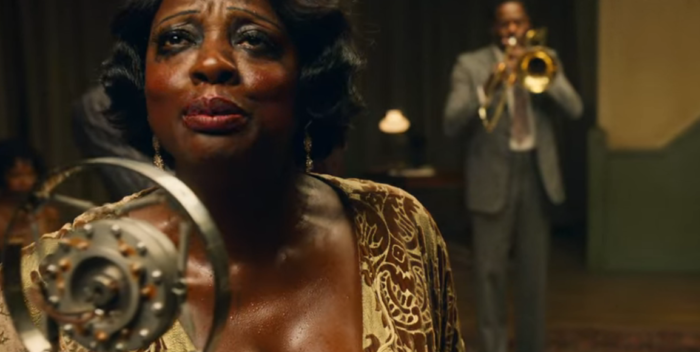 The first is obvious: the leading man, Chadwick Boseman, has passed away recently but not before leaving this final, memorable performance. He died on August 28th from pancreatic cancer at age 43.

The second is more to the point of the film and play on which it’s based. In the 2003 Broadway revival of this play, the key character of Toledo, who dies violently, was played by the actor Thomas Jefferson Byrd, who received a Tony nomination for his work. Byrd was shot dead recently in his own home, a victim of sudden violence.

There’s a third irony, and I’ll get to it in minute. 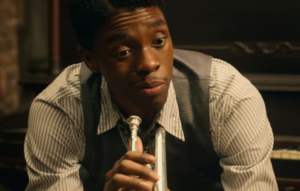 Ma Rainey was a real person, the original female blues singer, who died in 1935 at age 39. She was deep-throated, sassy, and a diva. Pulitzer Prize winner Wilson dramatized her life in one of his ten plays in the Pittsburgh cycle. “Ma Rainey’s Black Bottom” was nominated for a Tony Award and won a Drama Desk Award.

So now we have Oscar winner Viola Davis as Ma Rainey in a performance quite unlike anything we’ve seen her attempt before. For one thing, she’s been bulked up to give Ma some heft. For another, she sings! And she moves. She’s no longer sophisticated Annalise Keating from “How to Get Away with Murder” or any of the earnest characters she’s played in movies, such as Rose Maxson in Wilson’s “Fences.” Davis’s Ma is a star, she’s no victim, and she doesn’t suffer fools silently. Davis is, as they say, lit.  She is glowing. The performance is so organic you can’t believe she hasn’t been wowing audiences for years.

Ma Rainey has a band, led by Colman Domingo as Cutler, who is also the bandleader who tolerates her outsize demands for the greater good. Michael Potts is the bass player Slow Drag, Glynn Turman is Toledo the pianist, and Chadwick Boseman is Levee, the horn player. They’ve come to Chicago to record an album for Irvin, the producer (Jeremy Shamos) and the record company owner who will undoubtedly cheat them (Jonny Coyne as Mr. Sturdyvant).

Wilson is photographing a moment in time for Ma and her band, that’s all it is. Unlike “Fences,” “Ma Rainey’s Black Bottom” is less a three act play than a long one-acter with gorgeous set pieces and monologue. One thing happens, and it’s a stunner. But we don’t get to see the consequences. The great actor and director Ruben Santiago Hudson adapted the play for the screen, and he’s made it seem like more, digging into corners and lighting up unforgettable moments. He and Wolfe do what they can to open up the play but the movie still remains, in a good way, stagey. There’s no way around it.

To compensate for the lack of what I’d call “action,” we have the individuals. Boseman, who looks thinner than in the past (sadly we know why), and a little older than his years, still commands the film as Levee. He’s tired of being on the team, he wants his own band and has written the songs for it. They’ll be hits one day, one way or another. But Levee is also pent up with rage over his inability to make things happen. His eyes flash with danger even while he’s making sweet sounds with his horn. And when Boseman– in his finest moment of his short career —  delivers his principle monologue about Levee’s childhood, you worry about what lurks underneath.

Levee’s ire is focused on Toledo, the piano player, here in the person of the great Glynn Turman. This is the supporting performance that will get the awards attention, as Turman– with a long history of subtle and graceful TV work– is charming and devastating in this pivotal role. I suspect he’s been waiting to play Toledo all his life. In 1960, Turman debuted on Broadway in the original “A Raisin in the Sun,” directed by the late Lloyd Richards, the man who brought August Wilson’s plays to life subsequently in New Haven and New York. This is Turman’s moment even more than it is Boseman’s. We’d better see some statues in his hand this winter.

Equally good are Domingo and Potts, in less showy roles but just as fine and important. Shamos and Coyne are indelible in their own little drama, good cop/bad cop in wanting Ma’s music and making Levee miserable.

Wolfe and Santiago-Hudson have made a powerful, moving film experience that you’ll want to watch again and again. The entire production is top notch, with special kudos to cinematographer Tobias A. Schliesser and editor Andrew Mondshein.

PS Here’s my third irony. Glynn Turman maybe brings more to “Ma Rainey” than even he realizes. He was married in the 1970s to the legendary diva Aretha Franklin. Having known Aretha pretty well, I couldn’t take my eyes off Davis as many of Ma Rainey’s situations and comportment reminded me of the Queen of Soul. I wonder if Viola didn’t have Aretha in mind a little bit in this performance. Certainly, Turman saw it, too: this woman an independent artist, knowing what she wanted from her craft, and determined to get it. I’m relieved now that the Aretha movie, “Respect,” isn’t competingt with “Ma Rainey” in the same year. “Ma Rainey” is almost the preface to Franklin’s story.