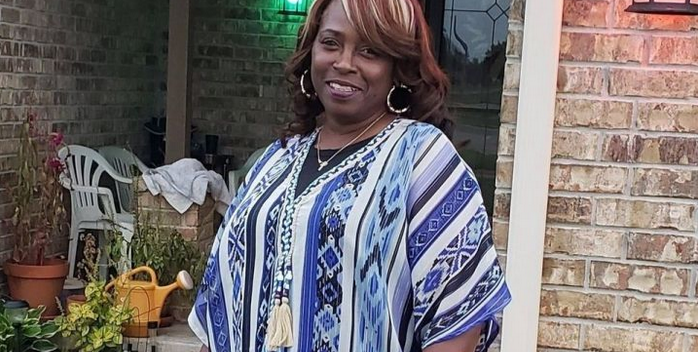 EXCLUSIVE I’ve just gotten off the phone with Jeanise Jones, the charming 62 year grandmother who became the unwitting “babysitter” in “Borat 2.” She hasn’t seen the movie yet and she only discovered she was in it last Thursday when her cousin told her he’d seen her in the trailer for Amazon Prime. (She doesn’t have Amazon Prime.)

Jeanise is winning over audiences as the heart and soul of “Borat 2.” That’s because unlike other “Borat” victims, she was not conned into making a fool of herself. Instead, she rises to the occasion and displays impromptu humanity and kindness when Borat– Sacha Baron Cohen– leaves his “daughter” with her along with a ball and chain and a dog bowl. He also left behind a three man camera crew and director, all of whom said they were working on a documentary that Jeanise thought would be on “an educational channel.”

A mother of three adult children and grandmother to six, Jeanise is currently unemployed after working 32 years for a local insurance company in Oklahoma City. She wound up in “Borat 2” by accident. Her pastor, Derrick Scobey, helped her explain the crazy story to me over the phone. The film crew came to Ebenezer Baptist Church in OKC and asked to meet “grandmother types.” They saw quite a few but none met their needs. Then a friend sneaked out and called Jeanise and said, “You should come over here right away.”

The film crew fell in love with Jeanise right away and took her, Borat, and Tutar– really the actress Maria Bakalova– to a house they were using. That’s where Borat leaves Tutar with the aforementioned objects. Jeanise told me: “I totally believed she was 15 and that he had left her there with me. She told me she was being groomed to be Donald Trump’s mistress if she didn’t find another rich husband. She had to find a rich husband to save her father. I believed her, she was good.”

As for the ball and chain, Jeanise was convinced by Cohen and the crew “that she was would run away” if she didn’t use them. Jeanise says, “But we didn’t need it.”

Bakalova stayed in character the entire time. “The people in that house had a goldfish tank and she wanted to eat one,” Jeanise recalls. “She was good.” When they went for their car ride, Maria jumped on the hood of the car. “She said women in her country didn’t sit in cars, didn’t go to school, or have jobs. She was also wearing horse blinders, she said, to keep her focused. I finally convinced her to take those off.”

Jeanise was convinced they were making a documentary for families from third world countries “who didn’t have any rights.” The crew never contradicted Maria or let it slip what was really going on. This took place, Jeanise says, over an hour. But in that time, Jeanise– whose compassion for Tutar is genuine on camera–explains to her that women have rights and mustn’t be treated this way.

Everyone from the church believed Tutar was in distress. Scobey told me: “We were praying for this girl and what was going to happen to her. And Roger, we are not gullible people.” That’s how convincing they were.

Jeanise was paid $600 for her time. Months later, the crew returned for a final scene. Borat asks her if she’ll be his “black American wife.” Jeanise replies: “No, I will not.” She was paid another $3,000 and never heard from anyone with the movie again.

It’s important to note that Jeanise had never seen the first “Borat” movie, didn’t know who Sacha Baron Cohen was, and was convinced this film, she says, “would never be shown in the U.S.”

Now, unemployed, Jeanise’s friends have set up a GoFundMe page for her. She isn’t asking for any more money. But frankly, the “Borat” producers owe her a substantial check. She’s the moral center of a movie that’s earning millions.

Ellen DeGeneres, Tamron Hall, this a guest for you. Hollywood, a star is born. Oklahoma City, get out a red carpet.