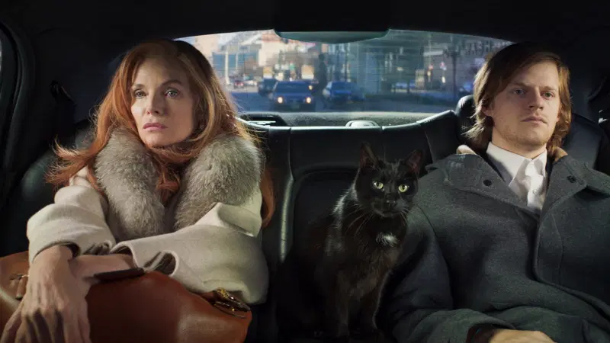 Michelle Pfeiffer cocks her head back imperiously as Frances Price, a once wealthy, still gorgeous widow, in “French Exit,” and pulls into second place behind Frances McDormand in the coming race for Best Actress at the Oscars. Someone wrote that it’s a light year for contenders in that category, but with Jennifer Hudson, Kate Winslet, and maybe Halle Berry possibly on the list, this is a high compliment.

That’s because Pfeiffer’s performance is so unexpected in a comedy termed “surreal” and edgy that begins in question and blossoms into something unique and memorable. First of all, to think that Michelle Pfeiffer is 62 years old makes no sense because she looks maybe 42. Did she ever age? Or was is just that after her big run from 1988 to 1992 (three Oscar nominations) she turned down her celebrity volume and got very zen?

“French Exit” was a 2018 novel by Canadian author Patrick deWitt, who wrote the screenplay for the movie. He also wrote the novel, “The Sisters Brothers” that was turned into a big flop of a movie, so I was a little nervous as “French Exit” proceeded that we’d be in trouble. And really for the first half of this film, directed by Azazel Jacobs, I wasn’t quite sure we were going to make it. Pfeiffer’s co-stars are Lucas Hedges, looking like Wes Anderson, as her laconic son, Malcolm, Imogen Poots as Malcolm’s older and impatient girlfriend, a Canadian actress named Susan Coyne, as Joan (who is maybe Frances’s wealthy, wise, and plain sister); and a black cat — yes– a black cat, who is more than he appears to be.

And there’s one more actor in this gang: Valerie Mahaffey, who has been chipping away year by year at mostly a television career, with an Emmy win and a Daytime Emmy nomination. She plays Madame Reynaud, an American ex pat with money who nearly steals the film and gets herself a Best Supporting Actress slot almost effortlessly. Mahaffey is an overnight sensation at age 67 (and also looking much younger).

If you don’t know deWitt’s novel (I didn’t) you don’t know what you’re waiting for. So when Frances is advised she’s broke and must sell everything, Joan — these people are RICH — tells her to go stay in her spare apartment in Paris. As you do. Frances seems barely attached to reality. Instead of getting on a cheap flight to Charles DeGaulle, she and Malcolm set sail in separate state rooms on an expensive cruise liner. They bring their black cat, who is clearly more than just a house pet, and we find out later is named for Frances’s late husband and Malcolm’s father, Frank (played stiffly by Tracy Letts).

On the cruise, they meet a medium named Madeleine with special talents played Danielle McDonald, who is also great this season as rock critic Lillian Roxon in “I Am Woman.” How Madeleine is on the cruise, how Little Frank the cat, passes customs, all of this is a mystery that kicks the second half of the film into something you now realize is quite different than the set up, and 100 times more enjoyable.

Among the things that happen is that Frances becomes a little like Aurora Greenaway from “Terms of Endearment.” A group of eccentric people are now attracted to her situation like metal shavings to a magnet. It’s no longer just her and Malcolm as the camera draws back to reveal a group that gathers for no apparent reason except possibly a missing cat. And that seems to be enough for director Jacobs to pull off a satisfying, surprise success. You realize that with this film, with “Nomadland,” and “The Father,” that 2020 isn’t a lost movie year* at all. It was just a slow starter.