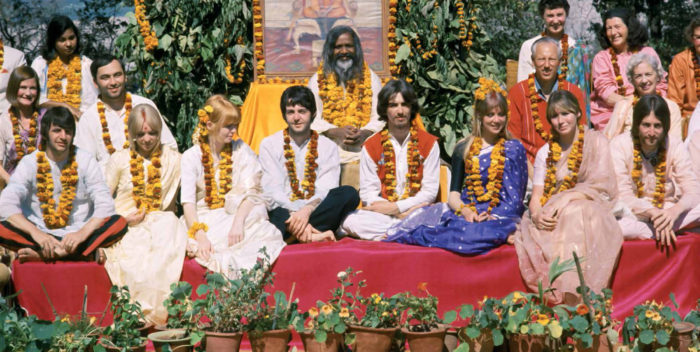 Paul Saltzman was a 22 year old from Montreal who found himself in India in 1968 at the same ashram as the Beatles and their celebrity friends.

This is called luck, and a fluke. Saltzman had gone on a spiritual journey as a fledgling camera man on a shoot, and wound up taking lots of pics of the Fab Four at a critical point in their lives and careers. He spent a week with them, their lovers and wives, as well as Donovan, Mike Love of the Beach Boys, and Prudence Farrow. But until now he’d never done anything with the photos until his daughter reminded him they were just gathering dust.

Now we have “Meeting the Beatles in India,” written and directed by Saltzman, narrated by Morgan Freeman (which is kind of overkill) and encumbered by a clunky opening structure. Once you’re past that speed bump, the film turns out to be a charming and important historical document of the group, the people around them, and Saltzman’s own little memoir. I loved it.

Saltzman made a couple of smart moves in making the film. He hooked up with Beatles historian Mark Lewinsohn, whose books about the Beatles’ recordings are invaluable. He takes Lewinsohn back to the ashram with him, and we finally visit the site of this mythic adventure that produced half the songs for the White Album and a bunch more besides. It also changed the lives of everyone there, maybe especially George Harrison, who introduced Indian music to the Beatles’s records, and Eastern philosophies to the Sixties counterculture.

Saltzman also includes David Lynch, chief proselytizer of meditation, who Paul McCartney and Ringo Starr have become very chummy with in years since all this happened. So we get a little plug for meditation, a good thing, which was all derived from their guru in Rishikesh, Maharishi Mahesh Yogi. There’s a lot of archival film of the Yogi with the Beatles, which I’ve never seen before, plus footage of everyone there as well as Saltzman’s photos. There are some nice insights into the Beatles, too, from someone who was there with them but beholden to them.

My favorite part of the film is when Saltzman goes to Hawaii to find Rikki Cooke, the actual inspiration for the song “The Continuing Story of Bungalow Bill.” Cooke was the hunter, the killer of the tiger who “got him right between the eyes” staying then at the ashram. John Lennon was horrified by him and wrote the song. Cooke was so catalyzed by the event that he never picked up a gun again, became a conservationist and National Geographic photographer. It’s a riveting story.

I also loved the interviews with Patti Boyd, then George Harrison’s wife, and her sister, Jenny. They are really marvelous witnesses to that whole period. And of course,  we get to see the ashram now, see where everyone stayed and wrote and meditated, and the room from which Prudence Farrow wouldn’t come out to play, inspiring “Dear Prudence.”

You don’t have to be a Beatles fan but it helps, and if you are, you will not be able to get enough of this film. What sets it apart if that it’s not sanctioned by the Beatles or their estates or Apple Records. It’s utterly independent, and factual, a missing link in the group’s history, unbound to group politics or image polishing. There is no Beatles music and you don’t miss it. You’ll be too busy going back in time to see something we’ve never seen before.

“Meeting the Beatles in India” is on the Gathr website and platform now, but I’m told it will be on VOD October 9th for John Lennon’s 80th birthday. It’s not to be missed.