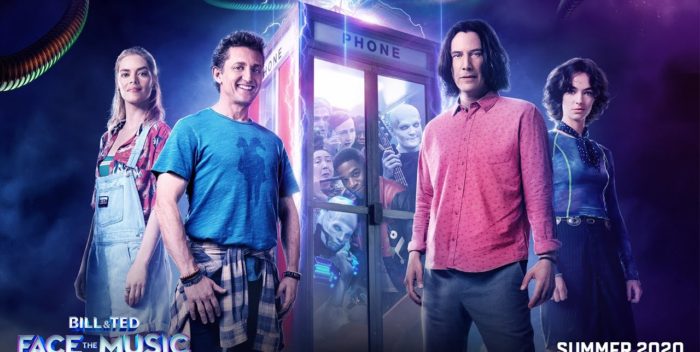 I can’t say I was a particular fan of the first two Bill and Ted movies. Alex Winter and Keanu Reeves starred in those comedies back in 1998 and 2001, and they were sort of the poor man’s “Wayne’s World,” which isn’t saying a lot.

So why are they back in 2020? Money, baby. Someone thought there would be a nostalgia for the Valley Guy time travelers. Is there? I have no idea. But “Face the Music” will be the first film saved by the pandemic, as many will see it on TVs and computer screens, which are preferable to a big screen in this case.

Bill and Ted are now 50, they have young adult daughters (Samara Weaving and Brigette Lundy Paine) who are charming distaff clones of their dads. The guys are also married to much younger women, the mothers of the girls. One of them looks like Mandy Moore. They are fairly innocuous.

The plot of “Face the Music” is thinner than the newest iPhone. Bill and Ted must travel to the future to find themselves years from now and retrieve a rock song that will unite the world. I am not kidding. Meantime, the daughters go back in time to find them a great band including Jimi Hendrix, Mozart, and Louis Armstrong. Don’t ask. Also in this mix are a female Darth Vader played tongue in cheek by Holland Taylor, and a Rosencrantz and Guildenstern in the form of William Sadler (as Death, he appeared in the 1991 movie, and steals the film) and Anthony Carrigan as a ditzy robot.

Mostly, it’s a little send up of “Star Wars,” with a “Game of Thrones” set (as hell), and lots of well executed costumes and makeup, almost like a mega version of “Bewitched” when Tabitha would bring historical characters.

“Face the Music” is inoffensive and not memorable. It can only be hoped this is the last adventure for Bill and Ted, but you won’t be mad you said goodbye to them with all this goofiness. Rent it, it won’t hurt you.

PS The movie has 25 producers including Steven Soderbergh, and I have no idea why. He can’t need the money, if there is money here.