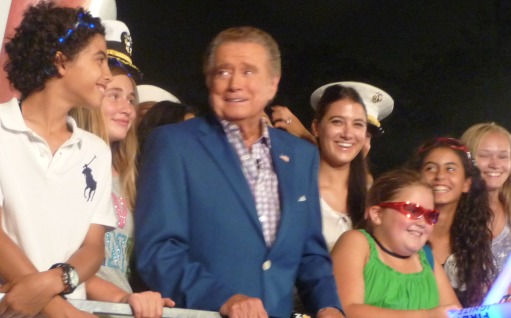 It is with great, great sadness that I report the death of Regis Philbin. He was 88, and wife Joy were living in California near their kids and grandkids. Regis passed away here last night in Greenwich, Connecticut. He and Joy had sold their house and were packing up. Regis, I’m told, died in his sleep, peacefully.

I was very lucky to have a long friendship with Regis, one of my heroes and a person I enjoyed so much. There will be lots of tributes to him over the weekend. I can tell you that Regis was a loyal, great friend, and as the shock of his death sets in I am tearing up. He really was one of the greatest. The Regis story takes him from the Joey Bishop show to all kinds of hosting jobs to starting “Good Day LA” with Cindy Garvey. But it was when Regis came east and started “Live” with, eventually, Kathie Lee Gifford, that his star soared. Regis invented what we call “host chat.” He’d come on every morning live and talk with Kathie Lee or some of the women who preceded her, about his night out in New York with Joy. The stories were hilarious and Regis was mesmerizing. It was a live monologue, and it was never boring, particularly when Regis acted out what had happened to them at the theater, at movie screenings, at premieres. One of my favorite stories is when he and Joy showed up a day early for dinner at Martha Stewart’s house. Joy was co-hosting that day, and it was flat out hysterical.

No one loved Regis more than Michael Gelman, who was not the original producer– I think it was Steve Ober– but Regis liked to say he raised “Gelman” from a pup. Regis and Joy also loved Kathie Lee and Frank Gifford, and actually did socialize with them all the time up in Greenwich, Connecticut.

The thing is, no matter what a big star Regis became, he didn’t change. Honestly, he remained totally himself, a kind of savvy Mr. Magoo who’d seen it all in Hollywood and Las Vegas but was always the kid from the Bronx. He loved Dean Martin and Perry Como, he loved his kids, and most especially Joy. Years ago, some woman went to the National Enquirer with an invented story about him, I checked it out and wrote that she was a phony. He thanked me profusely. There was too much velcro between Regis and Joy for any funny business.

Twenty years ago I edited an Oscars magazine for Tina Brown, and the great publicist Norah Lawlor threw a dinner party at an Italian restaurant on the east side. Who comes in, out of nowhere, Regis, with Gelman. Regis said, “What are you kidding? I wouldn’t miss this.” They stayed all night. There was a mentalist doing tricks for entertainment, he made a lit cigarette float through the air. I’ll never forget Regis saying, Do it again. He couldn’t get over it.

The fact is, Regis and Joy — I am so lucky to say– have been a big part of my nightlife in New York the last 30 years. We’ve seen good movies and bad, same for Broadway shows. Regis always says, “Roger, come here, what was that?” I’m always shaking my head with him. “I don’t know.” When Regis left “Live” for greener pastures, we still each other and kibbitzed. It was often with Peggy Siegal, or at one of her events. She loved him, and the Philbins loved being out as her guest. Regis was great at talking up movies the next morning on the show, even if he didn’t understand them.

My head is spinning. One lucky bit was that back in the mid 90s, Regis and Joy’s daughter JJ was an assistant to us at the Intelligencer at New York magazine. We had a lot of fun. Today, she’s a big TV producer and writer, as is her sister, Joanna. Regis was bursting proud of them. We also talked about his older kids, who he was equally proud of.

He wrote a book called “I’m Only One Man!” It’s a great read. Pick it up on amazon. He was courtly and polite, an insider’s insider who knew to how a good guy could survive in a world of sharks. I really loved him, as so many people did. Condolences to Joy, the family, and the Gelmans. There was only one Regis Philbin.