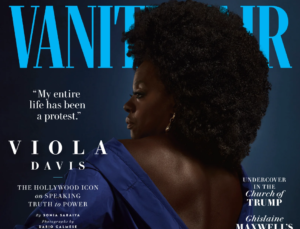 The magnificent Viola Davis finally got the cover of Vanity Fair. She’s won two Tony Awards, the Emmy, Oscar, a Golden Globe, and BAFTA plus like 90 other awards (like 90, for real).  It’s about frickin’ time. It would have been nicer on the September issue, and a cover photo where you could see her face, but we’ll take it!

The cover was shot by Dario Calmese, and he’s the first ever black photographer to shoot a Vanity Fair cover. Change comes slowly at Vanity Fair. Radhika Jones has been the editor in chief for how long now? But we’ll take it!

Viola’s first Tony nomination was in 1996, for August Wilson’s “Seven Guitars.” She won in 2001 for Wilson’s “King Hedley II.” She won again for Wilson’s “Fences” in 2010. But it took until 2002 for her film career to launch with searing, memorable performances in Denzel Washington’s “Antwone Fisher” and Todd Haynes’ “Far from Heaven.” I was so knocked out by each of those that I featured her in an Oscar magazine I edited for Tina Brown’s late lamented Talk.

Sonce then I’ve gotten to know Viola and her husband Julius Tennon. I had the honor of sitting with them a couple of years ago at the Critics Choice Awards. They have their own production company, and it’s booming. Recently a video went around of Viola demanding equal pay not to men who haven’t won all those awards, but women, like her pal Meryl Streep. She was completely right!

“Viola is one of the great actors of all time,” says Denzel Washington in the cover story. “She’s been recognized later than some. But some people get the opportunity early, and they’re done by Tuesday.”

Six seasons on “How to Get Away with Murder” made her rich and earned her a lot of awards on the small screen. I, personally, never understood a word of what was going on. Now that the show is done, Viola Davis is going to SOAR. All she needs is the material. More gold statues, more speaking out!

Viola, we love you!

PS This should have been the cover. What’s wrong with Vanity Fair? Why can’t they get it right? PS It’s been pointed out to me that VF couldn’t even get a black writer for the piece. What the heck is that about?