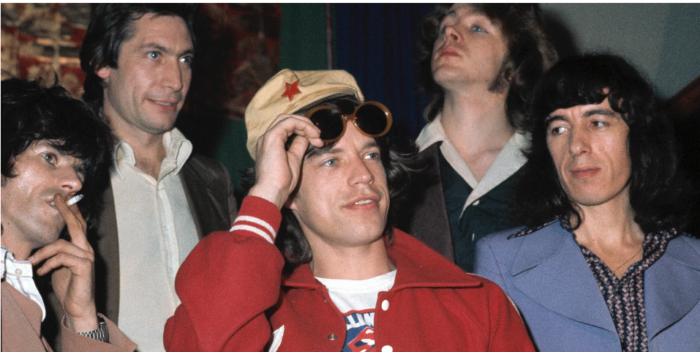 “Criss Cross” is an unreleased track from the great Rolling Stones album of 1973, “Goats Head Soup.” That’s the album with “Angie” and “Doo Doo Doo Heartbreaker.” It’s also the album that ends with “Star Fucker,” the title of which had to be changed over and over and couldn’t be on the radio. I still remember the day I got the album, the day it came out, and listened in order from beginning to end. I was like, Whatt??? (I was sixteen.) It’s a great album.

“Goats Head Soup” is all souped up for a new release with two other outtakes– “Scarlet” and “All The Rage” – plus demo versions, outtakes, live performances & more.

This is real Rolling Stones, too: produced by Jimmy Miller, with Mick, Keith, Charlie Watts, Bill Wyman and Mick Taylor, as well as a murderers’ row of guest stars including Billy Preston, Nicky Hopkins, Ian Stewart, Bobby Keys, Jim Horn, and Chuck Findley. (Ronnie Wood was with the Faces then. Jagger’s current girlfriend hadn’t been born yet.) You can’t do better than that. Angie Bowie, David’s first wife, thinks “Angie” is about her. Some say it’s about Carly Simon but called “Angie.”

According to the press release: “Deluxe 4LP & 4CD box sets pay full homage to the original release – including the much sort after Brussels Affair, recorded live at the Forest National Arena in October 1973, plus a full disc of Rarities & Alternatives (including three unheard tracks). The 4CD boxset also includes a 120 page book of rare photos & essays, plus four re-produced 1973 tour posters (rolled up inside the package to avoid creasing). Goats Head Soup 2020 is also available in deluxe 2CD & 2LP packages, as well as on cassette and standard CD or LP. Additional exclusive are also available from the Rolling Stones official store.”

Release date is September 4th for many different configurations depending on how much you want to spend.