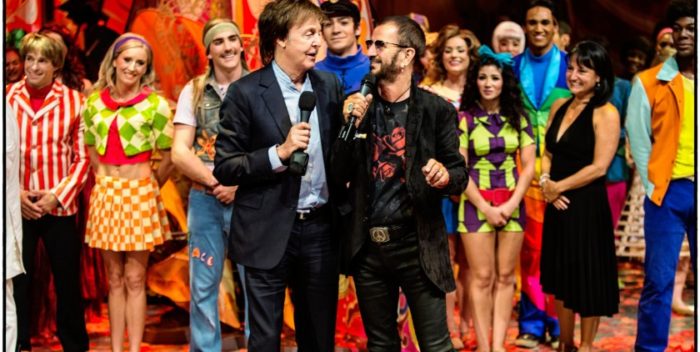 When anyone says Cirque du Soleil you think of flying acrobats, nameless, faceless bodies from shows with strange names.

But the recent bankruptcy filing from Cirque du Soleil also affects the Beatles, Michael Jackson, Blue Man Group. and the french province of Quebec. They are all screwed.

Cirque du Soleil has at least $1 billion in debt, and that’s from long before the coronavirus. Bad management made them vulnerable to COVID-19, certainly. The ceasing of all live performances everywhere did them in.

But it’s not just those awesome shows we’ve seen with the lights, tumbling, water, and so on. When Cirque laid off almost 4,000 people last week, they were certainly at the top of the list.

But Cirque du Soleil puts on the amazing Beatles show, “Love,” at the Mirage Hotel in Las Vegas; the Michael Jackson show called “One” at Mandalay Bay in Vegas, and Blue Man Group everywhere including its home, New York, on Lafayette Street. They have all been closed since March 15th and may never return.

Also on hook are the good people of Quebec, the French province of Canada. Their publicly invested funds bailed out Cirque du Soleil because that’s where it came from. Creator Guy Laliberté started Cirque there. But those funds are gone, maybe $400 million.

In February, perhaps sensing the end was near, Laliberte sold his 10-percent minority interest to the Canadian investment company Caisse de dépôt et placement du Québec (CDPQ). They are now left holding the bag with TPG, the San Francisco-based investment firm that bought 60-percent stake in 2015. The ownership group also includes China’s Fosun Capital Group, headquartered in Shanghai. Laliberte earned a possible $1.5 billion in the TPG deal, and is said to be worth $2 billion.

But Cirque du Soleil is left high and dry. And so are the “Love” and “One” shows. They have no performances set until August 1st, when their reservations start working again for ticket sales. But if everyone’s been laid off, who’s going to be Eleanor Rigby or dance to “Billie Jean”?

A Jackson insider told me: “Right now they can’t reopen the shows because of the virus. Once they are able to reopen the shows they will. They’re waiting for input from bankruptcy counsel to make sure they will get paid when the show reopens. TPG — as private equity companies will do  — hampered the company up by putting $1.2 billion of debt on the company and taking the money out.”

I’ve never seen “One,” but I feel like I have a PhD in “Love.” When it opened on June 30, 2006 I went out to the Mirage and was given an extensive education by George Martin, et al into the whole background. Paul, Ringo, Yoko, and Olivia Harrison were all there. And everyone returned for the 1 year anniversary. It’s been a money maker for the Beatles and very good for their brand. (I went back a third time, years later, with Lou Ferrigno and his wife, and we had a ball.)

So we’ll keep an eye on this. If you know anything, or you were part of these shows, drop me a line at showbiz411@gmail.com.