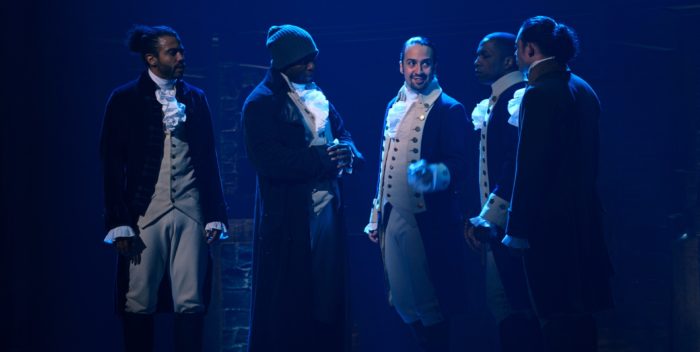 I always say, and you may, too: Donald Trump doesn’t realize who will write his story. Lin Manuel Miranda got that when he read Ron Chernow’s biography of Alexander Hamilton, and the result was a raft of prizes, the highest praise, commercial success and an understanding of history.

“Hamilton” was filmed on Broadway in 2016 for posterity by its award winning director Thomas Kail, using many cameras and some tricks not seen before in performing such an enterprise. The reward is “Hamilton: The Film,” which I think may explode the internet and DisneyPlus on Friday when it’s made available for streaming. I just finished it. This is the third time I’ve seen Hamilton– after its original two opening nights– and I am gobsmacked by it. You will be, too.

Prepare for a two hour, forty minute ride. You can’t look at your phone, or take long breaks or even wait and “see the rest of it tomorrow.” For one thing, it’s impossible. Your are drawn in from the first minute and there is no backing out. Make sure the dog is fed and walked, the babies are asleep, the ovens are all off. You do not want to be interrupted.

Frankly, if “Hamilton: The Film” had opened in movie theaters it would have been a massive hit. As it is, I don’t see how it can’t be nominated under this year’s temporary rules for Best Picture. And maybe win. It’s just an extraordinary achievement, not just theatrically but cinematically. You won’t think for a minute “I’m watching a play.” Nope. It’s a movie, and it’s as convincing and utterly involving as if Kail and Miranda had built sets and all that stuff we rely on.

Maybe the music is the sets. The music is so overwhelmingly melodic and witty that it becomes a character unto itself. So many people know the score from the bestselling album that it’s not a problem. I remember at the Public Theater opening, no one knew anything in advance. We kept hearing, ‘there’s a lot of rap music.’ There is some, but it’s so good, so urbane, so clever. And overall the music is what you might call symphonic R&B. Or just great Broadway.

All the songs, like the people who sing them, are hits, one after another. After you watch this movie, you’ll only want to hear Phillipa Soo and Renee Elise Goldsberry’s voices. I don’t know how Leslie Odom Jr went to bed every night after singing his songs, especially “The Room Where it Happened.” Same for the dizzying talents of Lin-Manuel, Daveed Diggs, Chris Jackson, Anthony Ramos, Jasmine Cephas-Jones (yes, her father plays Sterling K. Brown’s dad on “This is Us”– some family!), and the quite hilarious Jonathan Groff. Their heads must have been swimming with excitement and melody.

It’s not that Lin Manuel Miranda had that brainstorm that comes once in a million for even the greatest genius. He saw something else here back in 2014-15 that now is pressing on us. Alexander Hamilton, the immigrant, making his way in the white world of George Washington, becoming essential and indispensable, infiltrating the Schuyler sisters’ society world and rising to the top. And then, to cast almost all multicultural actors to play people we’d been taught in school for generations were white and untouchable. That first night at the Public, the whole concept was like a brain explosion.

Originally, this “Hamilton” film was supposed to be released in October 2021. When this new date of July 3rd was announced, George Floyd hadn’t been murdered yet. That was two weeks away. We were just dealing with the pandemic. Even the immigrant struggle had been a bit backburnered. But look how the news has made “Hamilton” so important to see right now. By a series of turns in the universe, “Hamilton” is exactly the history lesson we must study ASAP. It’s almost like it’s here to save us.

Really, kudos to Thomas Kail. He puts us right in the room where it happened. The actors, every one of them, deserve prizes. The music, I told you, I will be singing it in my sleep tonight. The cast, wherever they are, will have trouble going out for food on Saturday. No one will socially distance themselves. There will just be a lot of hugging and applause. (I clapped many times and you will, too.)

Damn COVID-19. We were gypped out of a real red carpet premiere for this movie. Now I’m really depressed!

So, I’m sorry, you guys have to wait til Friday. But the “Hamilton” cast was so over the top great on Jimmy Fallon last week, that I’m giving you that video here. In the show Phillipa Soo and Renee Elise Goldsberry sing “Helpless” as their characters each fall for Hamilton. In this Zoom video, the whole cast is featured, even the ones not in the song on stage. Just brilliant.