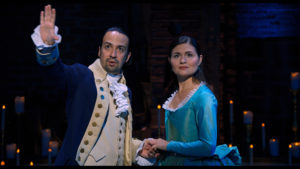 The filmed stage version of “Hamilton” comes to DisneyPlus on July 3rd. The mega hit musical will one day be a real movie, but until then this should do fine. It was filmed at the theater over three nights before the original cast left. Disney was going to release it in October, but since everyone’s home, and it’s ready, and it’s July 4th, and we need it desperately, here’s “Hamilton”: