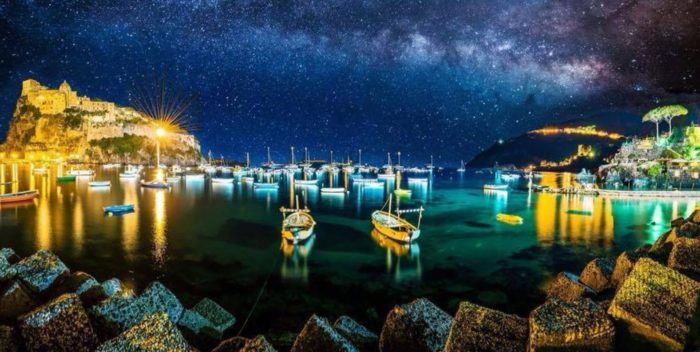 Forget anything I told you a couple of weeks ago about the Ischia, Italy Film Festival. Here’s the real information about the real festival, run by the great Pascale Vicedomini. I’m booking my tickets now!

“The 18th annual Ischia Global Film & Music Fest is going to take place here this July as planned, except it will be called ‘Ischia Smart 2020’ to reflect the immediate needs of Italy’s Film and Audiovisual Industry, which is going through such a difficult time, along with the Campania region where the Isle of Ischia is located,” it was announced today by Pascal Vicedomini and Tony Renis, the festival’s founder and honorary chairperson.

“We owe it to an island that over a period of 18 years has become a significant reference point for international show business, and we wish to convey to the world the image of a typical Italian summer in a safe region. Campania, as its Governor Vincenzo De Luca has defined it – is a land full of optimism and enthusiasm that is ready to relaunch its artistic treasures and welcome tourists back to its unique locations,” he continued.

The dates of the festival – announced in February in the US, during the 15th edition of the “Los Angeles, Italia Film, Fashion and Art Fest” by producer Vicedomini and board-member Franco Nero have been confirmed as July 12 to 19. It will shortly be launched by a number of promotional and digital events in Italy and throughout the world.

Renis noted that over the years more and more Hollywood stars and studios have attended the annual gathering, with the expectation that they will be returning for future editions. “Ischia is a sought- after destination all over the world. Italy has always been the ideal setting for international productions thanks to its breathtaking landscapes and its talented film professionals,” he added. “And we hope that the beautiful Green Island will be chosen as a location for the upcoming television series ‘Ripley’ to be written and directed by the Academy Award-winning Steven Zaillian, who presided over last year’s festival.”

In compliance with the new rules imposed by the world health emergency, the Ischia Global Fest will make use of state-of-the-art technology and social platforms to create virtual events with leading personalities from the show business and artistic worlds participating. The artists will be connected live from their own locations to interact with the Italian professionals on the island.

The board of the Global Film & Music Festival, promoted with the support of Mibact (Dg Cinema,) the Campania Region and the participation of Siae and Nuovo Imaie, includes Renis as well as honorary president Trudie Styler (UK), and board-members Mark and Dorothy Canton, Marina Cicogna, former AMPAS president Cheryl Boone Isaacs, and marketing-executive Al Newman (USA) amongst others.