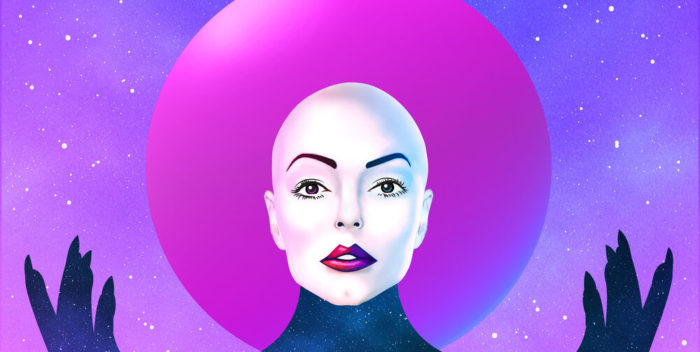 Below you can listen to Rose McGowan’s sort of electronic dance music album, “Planet 9.” Here is my review: this the album cousin Serena always wanted to make on “Bewitched.” Since Rose played a witch on “Charmed Lives,” this all makes sense. Is it good? You can’t apply these mundane judgments. That “Planet 9” is digital only and is self-released says it all.

However, Rose has written liner notes:
Hello, I appreciate you taking the time to read this. I’m Rose McGowan and for a long time, I worked in a strange place called Hollywood. Being an actress was my day job, but behind the scenes I was honing my skills as a multi-media artist, writer and thought leader. After realizing I’d worked on sets for over 57k hours, I knew it was time to assert my own voice, so I directed a short film called Dawn which was nominated for the Sundance Grand Jury Prize. After Dawn, I began a three-year writing project, my book, BRAVE. While writing about my life and thoughts on society, I needed to create art that would be soothing. I’d always loved using my voice, it was my favorite part of performing. When I was a small child going through tough times, I created a utopian world in my mind and I named it Planet 9. I felt safe on this invented planet of mine. I also used to wonder what sounds existed on my planet. As life went on, I forgot about how special my planet was, I forgot I could go there in times of trouble. Six years ago, astronomers found a new planet they named Planet 9 – It’s the new planet that demoted Pluto to a star. Holy s! They found my Planet 9! Around the same time, I met some French electronic musicians and I decided to make music that has the power to lift your spirit. I know this, art heals. Planet 9 takes you on a very special journey. I am not trying to be a pop star, I will not be performing this album. By using my knowledge of cinema sound design, I carefully created the sounds and words for a better place, an unknown world in our own mind that we can all travel to. Planet 9 is an artistic endeavor that I hope will help others meditate in a unique way. Let go, come to Planet 9.