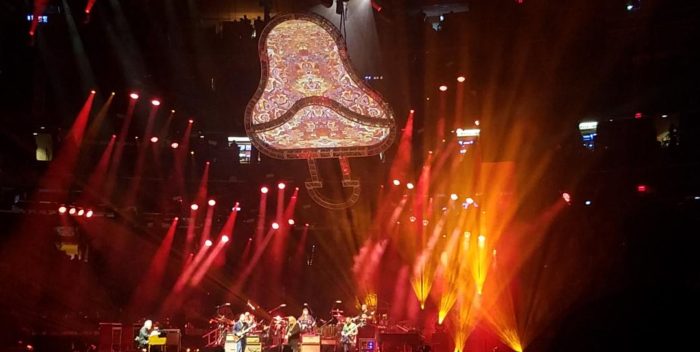 Virus? What virus? Madison Square Garden could not have been more full last, to the rafters, in the rafters, everywhere. The occasion was a 50th anniversary tribute and a farewell to one of the greatest and most influential rock bands of all time, the Allman Brothers.

Sadly, the actual Allmans– Duane and Greg– are gone. Also the great Butch Trucks and Berry Oakley. Derek Trucks exited in 2014, and so did his brother Duane. But the living remnants of the Allman Brothers — amazing Warren Haynes, guest pianist Chuck Leavell, the Trucks brothers, keyboardist Reese Wynans, drummer Jaimoe Johanson — reunited for what may be the last round up of everyone associated with the band. Only Dicky Betts stayed away.

And because Dickey Betts (spelling of the first name always changes), last night’s band– billed as The Brothers– did not play the group’s biggest commercial hit,”Ramblin’ Man,” which he wrote. A four hour show and no “Ramblin’ Man.” But they did perform Betts’s other hit, the instrumental, “Jessica,” which closed the first half of the show. It was a sublime moment. Let’s just say the band covered their Betts and did it very, very well. I felt like I levitated as they executed his masterpiece. (If the police could see me in my car when “Jessica” comes on a station, they would arrest me immediately.)

The Garden was indeed jam packed with a lot of men, white men, balding, or wearing various beards. The arena was quite cool– either MSG put on the air conditioning or turned off the heat. There was a breeze blowing, and surprisingly, not with the aroma of marijuana, which is what you would serve Allman Brothers with in a suburban basement from 1969 to 1975.

Still, the vibe was unmistakable. I saw a lot of guys in flannel shirts, but one in a leopard jacket who looked like he’d escaped from a Thompson Twins video. You may think of the Allman Brothers as Southern rock, but they were are and so much better. The songs are structured, and they are built– with great materials– from jazz, roots, blues, big band, and Little Richard. All of that combines to make startling pieces like “Jessica,” but also their early hoary classics “Tied to the Whipping Post” and “In Memory of Elizabeth Reed.” Then there are the cuts from the seminal album, “Eat a Peach,” like “Blue Sky” and “Melissa”– each written by Gregg Allman, as well as “Midnight Rider” and “Ain’t Wastin’ Time No More.”

What has kept the songs fresh, especially the many instrumentals– is that their foundations are strongly melodic, with lots of hooks. None of it is free form. All the songs are traditionally composed. Everyone involved in this endeavor starting in 1969 took their craft seriously and it still shows. Let’s not forget that Duane Allman, who died in 1971 from a motorcycle crash at age 24, was the stand out guest star on one of the great rock records of all time– “Layla” — and on Wilson Pickett’s version of “Hey Jude.”  We can’t begin to imagine what kind of career he might have had.

For years until Gregg Allman’s death, the Allmans played an annual ten day stand at New York’s Beacon Theater. So the Garden looked like a reunion for all the people who used to jam those shows. They knew all the words, they sang along, they played air guitar, they knew the crescendos, and cheered wildly for the last time. Now the various survivors go off on their own projects. But their one last hurrah was one for the books, never to be forgotten.