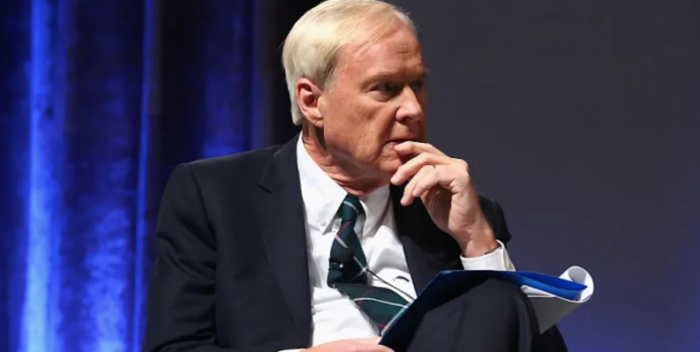 Let’s see what new careers were wrecked this evening.

Chris Matthews is out at MSNBC. Tonight was his last “Hardball” after 20 years. He says he’s retiring, at age 74. But clearly MSNBC showed him the door once reporter Laura Bassett named him as the guy who she claims sexually harassed her years ago. Bassett wrote an op-ed in “GQ” stating that Matthews “has a pattern of making comments about women’s appearances in demeaning ways” and that Matthews asked “Why haven’t I fallen in love with you yet?” just before a televised discussion about sexual-assault allegations against President Donald Trump.

But that’s not all:

Matthews was forced to apologize recently after comparing Bernie Sanders’ win in the Nevada caucuses to the Nazis taking over France in World War II. On Friday, Matthews mistook Jaime Harrison, a Democrat running for Senate in South Carolina, with Sen. Tim Scott, R-S.C. Both men are black.

So that’s it. Chris Matthews whole career will be remembered by these last incidents, not anything good he did or accomplished. Another person who worked but past his expiration date is destroyed. Maybe this is why people over the age of 70 shouldn’t be president.

Then there’s actor Timothy Hutton, famous for winning an Oscar in 1981 for Supporting Actor in “Ordinary People.” Hutton, once married to Debra Winger, has worked steadily. But in 1983 a young woman now says that he raped her. Sera Johnston was 14. Hutton would have been 23 and hot as a pistol after the Oscar win.

Buzz Feed broke the story, and it’s terrible. Hutton denies it. But Fox TV, always judicious, immediately canceled his current TV series before too much could be figured out. You’re guilty and dead first these days, cancelled. That’s it. Hutton, who’s 60, will have to live with this cloud over his head forever. In 10 years, if he’s lucky, he’ll get summer stock theater work.

(I wonder if the Academy will kick out Hutton, too, if it’s determined he’s guilty. It’s going to look very empty at the next membership meeting.)

One weird PS: Actor Real Andrews is mentioned in the Buzz Feed story. He once dated Johnston. When Buzz Feed persisted, his lawyer sent a statement. By coincidence, today Andrews was killed off on “General Hospital.” Talk about Mercury in retrograde!

“Today, BuzzFeed chose to publish Ms. Johnston’s false story. BuzzFeed knew the truth because they were provided with documented evidence,” Hutton says of the report by the online publication’s former reporters Kate Aurthur and Adam B. Vary, who now write for Variety.

“What’s really going on here is that Ms. Johnston’s extortion attempts failed,” Hutton added. “She then decided to follow through on her threat to go to the press with her false story. When I became aware of this, I went to the FBI, signed a sworn statement, and filed a criminal complaint against Ms. Johnston for extortion.”

“I will not stop fighting to expose this story for what it is – a failed extortion attempt based on something that never happened,” concluded Hutton.