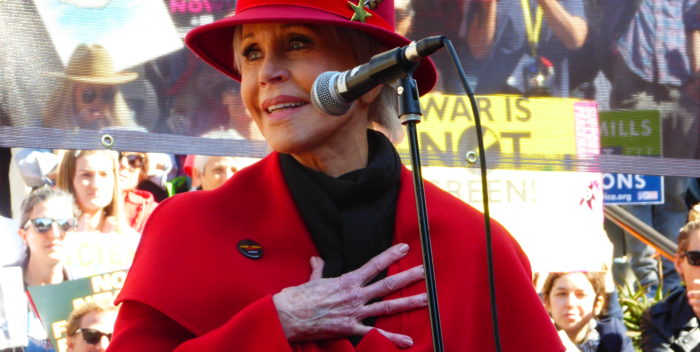 Two time Oscar winner Jane Fonda’s amazing life is bookended by political activism. She was in the forefront of the protests against the Vietnam War in the 70s, and now, at 83, she’s picked up the torch again with Fire Drill Fridays.

Fonda brought her weekly protest rally to Los Angeles yesterday, in front of City Hall, with a phalanx of stars and a huge following of fellow activists and supporters. On stage she presented a half dozen or so remarkable speakers, young and old, demanding change from government and corporations accused of “environmental racism.” (I’ll get to them in a minute because they were each remarkable.)

But it doesn’t hurt to have celebrities, and Jane brought an A list: the incredible Norman Lear, age 97, plus Joaquin Phoenix, Rooney Mara, Jane’s daughters from “Grace and Frankie”– Brooklyn Decker and June Diane Raphael, Rainn Wilson, Piper Perabo, plus Rosanna Arquette, Catherine Keener, and so on. The group has grown, and not just because they might get arrested (no did yesterday, that I know of) but because of a growing commitment to climate change and its many off shoots.

And just to show how Fire Drill Fridays has expanded since Fonda’s four months in Washington DC. Greenpeace is now involved.

Before turning over the afternoon to her speakers and guests, Fonda addressed the crowd with a rallying cry of a speech. She wore her signature fire engine red coat, and hat, and was no less electrifying than she was in her famous movies like “The China Syndrome” or “Coming Home.”

She declared, “Civil disobedience has to become the new normal!” And so it was. After the speeches, the group moved en masse, marching to Pershing Square in the bright sunshine, chanting positive slogans. Several musicians joined the crowd and everyone sang along. Actress Rosanna Arquette, a passionate Fonda-ista, with whom I walked most of the way, asked me: “Are you going to get arrested? You have to have $5o in cash and your drivers license.” This was helpful information. A few minutes later she added, with some disappointment: “I don’t think we’re going to get arrested. It’s a very peaceful protest.”

It was, and the messages weren’t lost on anyone near City Hall. For once, someone was actually doing something instead of just sitting at home and watching Netflix.

PS The speakers– watch for these people as Fonda’s movement grows. They are so articulate, and they are not giving up. A lot of what they talked about has been recently shown in the Mark Ruffalo movie, “Dark Waters,” in which a town is poisoned by a corporation. It’s worth watching because of its urgency. Corporations dump their waste on the poor and non white communities. Cesar Aguirre said, “We are frogs born in boiling water.” Can you imagine living that way?
Gloria Arellanes – a member of the Gabrieleno/Tongva Tribe who will be giving the Land Acknowledgment
Alicia Rivera – a community organizer with communities for a better environment, one of the co-chair organizations for STAND LA

Don Martin – a South LA resident who lives right next to a drill site who has lost family members to cancer, likely caused by the FF industry

Nalleli Cobo – A young environmental justice activist who has been using the power of her voice and the trauma of her lived experience to fight against a powerful polluter.