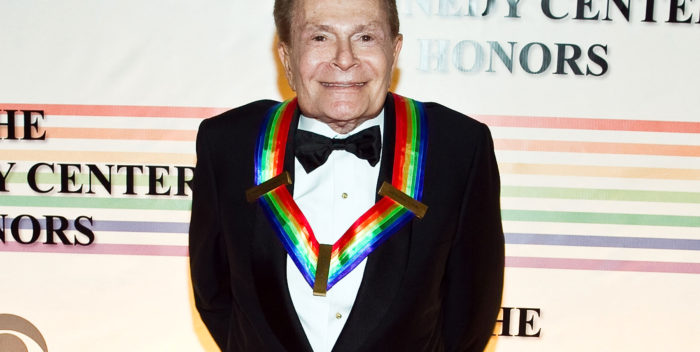 The Lunt Fontanne Theater was bursting with stars and heavy hitters of renown yesterday afternoon to say goodbye to the great Jerry Herman, composer of “Hello, Dolly!” “Mame” “La Cage Aux Folles” and many other hits. Herman died on December 26th at age 88. I did not know him, but I was always proud to say we lived on the same block.

The show was brilliantly conceived by Michael Feinstein and directed by Michael Bruni. The memorial was about the music and terrific songs from Herman’s shows, which are standing the test of time – are fun, emotional, optimistic in keeping with Jerry’s own attitude toward entertainment and life. There was a 29-piece orchestra on stage and 20 members of a Broadway vocal chorus who were able to create the moments from classic shows and add value to particular numbers. Herman’s musicals always had a huge place for the chorus in songs. A great emotional moment, was when famous Broadway conductor Don Pippin, the original conductor of “Hello Dolly,” came on to conduct. Very respectful and the audience got it. Huge applause on his entrance and for Betty Buckley, who just closed the national tour of “Dolly!”

Other standouts included Kelli O’Hara singing “Before the Parade Passes By” and Ron Raines leading the ensemble with “Mame.” Sutton Foster wowed the crowd with “I Don’t Want to Know” from “Dear World.”

The capper: Angela Lansbury and Paul McCartney each sent video tape presentations. Angela talked of her first meeting with Jerry which enabled her to move to the Broadway stage. She seems to have been an intimate very personal friend of Jerry’s. McCartney talked of Herman being “one of the all-time greats” whose music will last forever. McCartney should know: back in 1964, Louis Armstrong’s recording of “Hello, Dolly!” stopped the Beatles from having a 15th week at number 1!