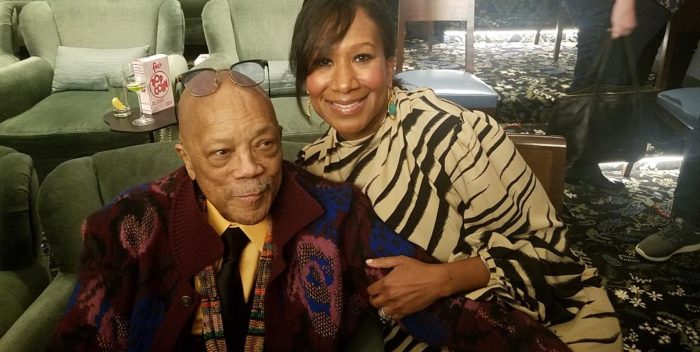 You know a movie company means business when Quincy Jones hosts a screening.

Last night at the very chi-chi exclusive San Vicente Bungalows, Q– as we call him– presided over a private showing of “The Black Godfather,” the extraordinary documentary Nicole Avant has made about her father, legendary entertainment exec Clarence Avant. Jonah Hill, looking very trim, moderated a Q&A afterwards with Nicole and songwriter Pharrell Williams, who wrote a great song, “Letter to My Godfather,” that may well be nominated for an Oscar.

Among the guests were 10 time Oscar nominee for Best Song Diane Warren as well as Pharrell’s lovely parents.

But the focus was on Nicole and Quincy, since Clarence — who’s 89– was taking the night off. Reggie Hudlin’s film about him — playing on Netflix now– is a must see for anyone with aspirations of being a player in Hollywood and also maintaining a great reputation and influence across many disciplines. While people like Q and Berry Gordy have always been out in front, very visible, Clarence has been the ultimate background guy. Two former presidents, Obama and Clinton, revere him. All the titans of the record business know his acumen for making deals and smoothing out situations so records or movies could be made even when things look shaky.

And what a family: Nicole, married to Netflix COO Ted Sarandos, is a former ambassador to Bermuda. She’s so beloved that Brad Bell created a whole family on “The Bold and the Beautiful” named for her. Alex Avant is a top agent at CAA, whose clients include Jamie Foxx. Foxx is one of the many familiar faces that appear in “Black Godfather,” and the movie is worth it just to see him do his imitations.

But what Hudlin does in this film is put Clarence Avant in context, so that the whole history of the entertainment business for the last 50 years is seen through his eyes.  Clarence’s early friendships with MCA (now Universal)) founder Lew Wasserman and his son-in-law Sid Sheinberg, not to mention many other powerful behind the scenes players are delineated and explored in marvelous ways. And still, as the movie observes, no one knows exactly how Clarence made his money. He never sent anyone a bill!

But what a thrill as always to spend an evening with Quincy Jones. A towering music and entertainment legend himself, he’s never looked better. “I stopped drinking, I dropped 50 pounds!” the 85 year old declared. “I’ve got to look good for the ladies!”