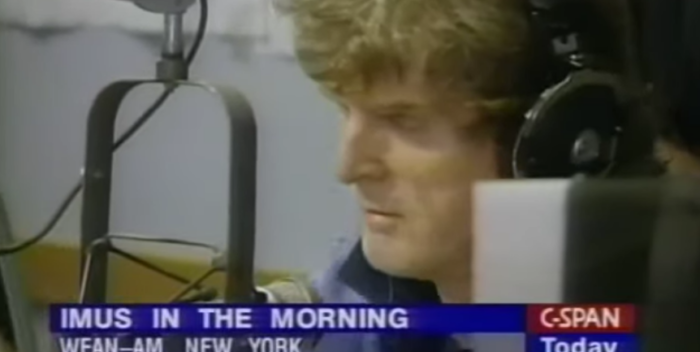 Don Imus has passed away at age 79. This was a brilliant, complicated man who had legions of fans and drove people crazy. But he was also loyal to a fault to his friends, and rambled on when everyone thought he should hang it up. Before Howard Stern really existed, it was all Don Imus on 66 WNBC AM in New York. Like so many others of my generation, I grew up with him. He was a trailblazer, and then he lit the trail on fire. His mishaps and so called scandals were nothing compared to his upside. RIP Don.

PS And yes, he was right wing– but you had to love Don Imus anyway. I don’t care. He may have fought with people who considered him a friend, but when he liked someone, he liked them. Last March he flew up from Texas– where he was ailing all this year– for the funeral of New Line Cinema co-chief Michael Lynne. Imus was also incredibly supportive of classic musicians like RRHOF member Sam Moore and plenty of others. Imus acted like a ‘yahoo’ or a redneck but he was anything but that. You can’t rule the airwaves, especially in New York, without a modicum of sophistication and street smarts.

“Don loved and adored Deirdre, who unconditionally loved him back, loved spending his time watching Wyatt become a highly skilled, champion rodeo rider and calf roper, and loved and supported Zachary, who first met the Imus family at age 10 when he participated in the Imus Ranch program for kids with cancer, having battled and overcome leukemia, eventually becoming a member of the Imus family and Don and Deirdre’s second son,” Imus’ family said in a statement.

The cause of death wasn’t given, but Don suffered from cancer and from emphysema. He was on oxygen in public quite often. But nothing stopped him, even when he was his most frail.

Here’s a sampling of Imus’s guests just in recent years.