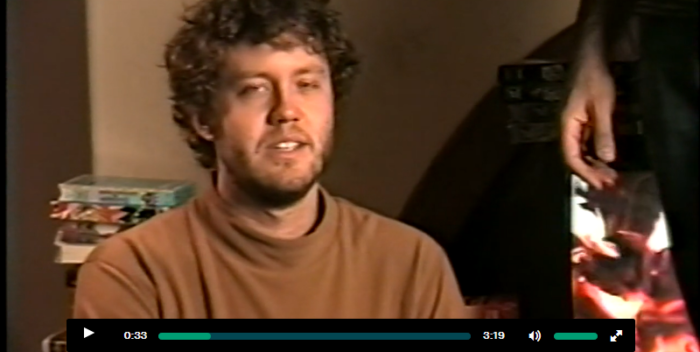 Well, all the best showbiz genes have lined up for Jack Henry Robbins.

The son of Oscar winners Susan Sarandon and Tim Robbins has written and directed his first feature film, called “VHYES.” It will be released next month by Oscilloscope.

Sarandon and Robbins not only executive produced the film, they act it in as well. The film is part of a kickstarter fundraising program that raised $25,000 this fall.

The film is described in a press release: “A bizarre retro comedy shot entirely on VHS, “VHYes” takes us back to a simpler time, when twelve-year-old Ralph mistakenly records home videos and his favorite late night shows over his parents’ wedding tape. The result is a nostalgic wave of home shopping clips, censored pornography, and nefarious true-crime tales that threaten to unkindly rewind Ralph’s reality. A hypnotic narrative told through hundreds of criss-crossing vignettes and a mix of absurdist comedy, sincere drama, music, and just a touch of horror, this wholly original feature debut expertly walks the fine line between complete lunacy and total sincerity. ”

The cast includes mostly indie actors, unknown to us, except for Thomas Lennon.

There are 12 EPs and producers including Sarandon, Robbins, and Stella Schnabel, daughter of artist Julian Schnabel.

I don’t know how the film will turn out, but the party should be amazing. Stay tuned!

PS Jack’s brother Miles has a burgeoning acting career. He’s been a regular on “X Files” and “Mozart in the Jungle,” plus he has three or four movies already shot for release this coming year.