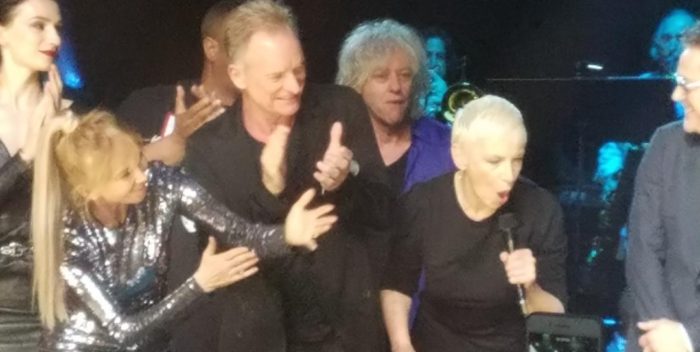 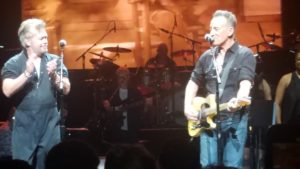 It was such a hot night at the Beacon Theater last night that Bruce Springsteen actually cut a song because the night was running too long.

The 30th anniversary Rainforest Foundation concert, produced by Sting and producer wife Trudie Styler, was such an extravaganza of talent and hits that it required two famous photographers, Brigitte Lacombe and Kevin Mazur.

The night was full of fun, but it was based around the most serious threat to the Earth of all environmental concerns. As Styler told the crowd: “I feel we’re losing the most important battle in the history of humanity,” she paused, “Somewhere safe to live.” 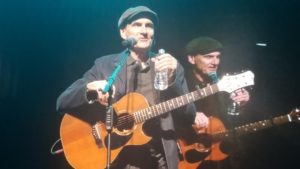 beginnings in the late 80s– also brought together a pair I never thought I’d see play together: Bruce Springsteen and John Mellencamp. And they had a ball together, singing both Bruce’s “Glory Days” and John’s “Little Pink Houses.”

Because Peter Gabriel was tied up in London, Sting honored him with a throwdown version of “Sledgehammer.” The house is still reverberating.

James Taylor, unusually animated, performed “Your Smiling Face” and “Up on the Roof.”

Adrienne Warren stood in for Tina Turner, whom she’s praying on Broadway, since Tina once guest starred for the Rainforest Foundation. Warren brought down the house with a roar on “Simply the Best.”

But it was the set by the Eurythmics– Annie Lennox and Dave Stewart– that catalyzed the room. They broke up officially in 1990, and have played together rarely since then. The duo offered, as Downey said, a “trifecta of hits” that included “Sweet Dreams (Are Made of This),” “Would I Lie to You,” and “Here Comes the Rain Again.” Lennox’s voice is richer and deeper than ever. Stewart’s guitar soared and he remained happily enigmatic. They were sensational. (Their last performance was 2014, for the Beatles TV special on CBS.) 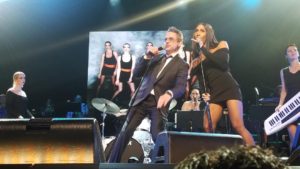 Did I mention that the more than affable host for the night was Robert Downey, Jr.? He opened the night singing Robert Palmer’s “Addicted to Love,” recreating Palmer’s famous video. Downey was about as cool a host as you could hope for. Something about the night made everyone on stage very candid and heartfelt. Downey credited Trudie Styler with rescuing him during a career lull pre- Tony Stark and putting him in a gem of a movie called “A Guide to Recognizing Your Saints.” (The film introduced Channing Tatum and Shia LaBeouf, two other Styler “discoveries.”)

Even Clive– who gives the Party of Parties before the Grammys every years– was impressed. I have rarely seen production values like this for a charity concert, but Sting and Trudie took three years off since their last one to really have a knockout night. (This included the great Narada Michael Walden presiding over a huge, magnificent orchestra that included 7 singers.)

Over 30 years the couple has raised millions and millions of dollars and the awareness of the world to help the indigenous people of Brazil and the rain forest.

Other performers included Bob Geldof, Debbie Harry, Ricky Martin, rapper DMC, Shaggy, Zucchero (singing with a pre-taped Luciano Pavarotti, who was way out of town), and Joe Sumner, who had a terrific showing on David Bowie’s “Ashes to Ashes.” I say ‘other performers,’ but each one was tremendous. The great Lisa Fischer went one on one with Sting on his 80s hit “We’ll Be Together.” They each gave as good they got.

The night ended with the whole group singing Journey’s “Don’t Stop Believin'” before the A Listers headed over to the Mandarin Oriental Hotel for a toast to three decades of remarkable philanthropy. As Styler pointed out, there’s work to be done: Brazil’s president Bolsonaro allowed the rainforest to burn this year, and then blamed the fires on, of all people, Leonardo DiCaprio. (No one knew who either one of those people were Sting and Trudie started the foundation!)

Said Styler, dryly, “You can’t make this shit up.”