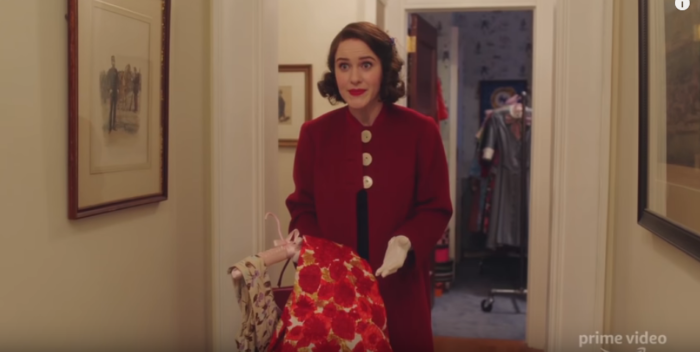 “The Marvelous Mrs. Maisel” is back for season 3 and Amazon Studios pulled out all the stops last night in New York for a really big deal premiere: screening at the Museum of Modern Art, with after party at the Plaza Hotel. And they dressed the Plaza main rooms for the occasion as if the whole place were a Miami hotel where Midge was performing, complete with a live band fronted by a singer who looked like Marilyn Monroe.

Everyone was there from the cast — Rachel Brosnahan, Tony Shalhoub, Kevin Pollak, Caroline Aaron etc — as well as show’s creators Amy Sherman Palladino and Daniel Palladino. Amy joked before the screening that there would be no tension at the party since she’d worked out all her budget issues with Amazon ahead of time. It sure looked like it on screen: to film the first episode of the new season, set mostly at a USO show, the Palladinos had 850 extras dressed in Army fatigues. No expense was spared!

But the big news from Season 3 is that next Friday– one week after Amazon drops 8 hour long episodes– “Mrs. Maisel” will get a soundtrack album full of original songs from the new season. You see, Midge is going on tour with Shy Baldwin (Leroy McClain), who’s a combo of Johnny Mathis, Jackie Wilson, Sam Cooke, and Nat King Cole. Baldwin has a backing group of singers a la the Shirelles, and all of them are in 7 of the 8 episodes.

So the Palladinos got a songwriting team of composer Curtis Moore and lyricist Tom Mizer to pen original tunes that sound just like they’re from 1960. McClain– who’s playing Aretha Franklin’s brother Cecil in the new “Respect”movie shooting in Atlanta– doesn’t actually sing. So Shy Baldwin’s voice is supplied by gifted Broadway singer Darius de Haas. The result is magic. Plus all the girls in the Silver Belles actually do their own singing. In one great moment, all of them let loose on the Phil Spector version of “White Christmas” on the USO stage– something you don’t want to miss.

Spoilers? I can’t say. But all the cliffhangers from the end of Season 2 are addressed  including whether Susie (Alex Borstein) will manage Sophie Lennon. Jane Lynch is in one scene of Episode 1 that is so absolutely hilarious, but you do have to see it. Lynch has already secured another Emmy for guest acting. Sadly, though, her scene is with cast member Brian Tarantina, who died last month at age 60 after finishing Season 3. Much was said about his passing. The Palladinos were obviously shaken by the loss.

So how long can this all go on? Amazon TV chief Albert Chang told me last night: “As long as Amy and Dan want to do it and have ideas for the show.” Amy told me she has no idea what happens exactly in Seasons 4 and 5, but she knows what the endgame is. So “Maisel” fans can breathe a sigh of relief.

Here’s one spoiler of interest: Emmy winner Luke Kirby is back in Episode 1 as Lenny Bruce. But we only see him one more time because Kirby — who’s finally taken off after a lot of hard work– had so many other commitments including HBO’s “The Deuce.” Dan Palladino did tell me that every word Kirby speaks as Bruce is from Lenny’s actual act. The show licenses the material. And Kitty Bruce, Lenny’s daughter, now 64 years old, loves the show.