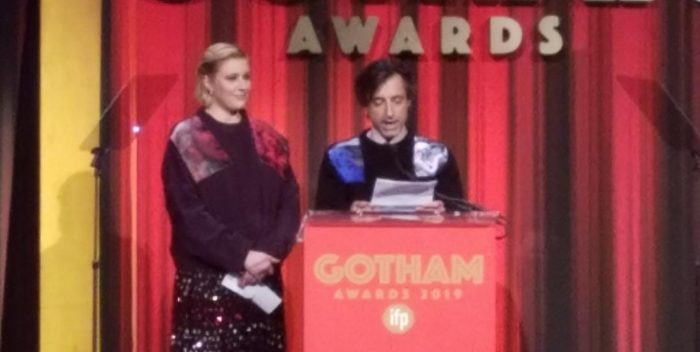 It was a big night for Netflix at the Gotham Awards. They swept the ceremony as Noah Baumbach won Best Director and Screenplay as well as Best Feature for “Marriage Story.” Adam Driver took Best Actor for the same movie, and the Audience Award voted on by members of the IFP.

The other big winner was actress Awkwafina, whose real name is Nora Lum and we may be using that soon. She won Best Actress for “The Farewell,” a lovely film that was also nominated for Best Feature.

This was the first year the Gothams were run by Jeff Sharpe, who took over for Joana Vicente, and he scored high marks. The show was well paced, clever, and just when you thought it might sag, it didn’t. Plus in addition to the many actors on the stage, there were lots of interesting people in the audience including comedian Jim Gaffigan, and two time Oscar nominee Djimon Housou.

The Gothams have not been a great indicator of other awards, but this might a different year. “Marriage Story” is sure to be on of the 10 top Oscar nominees for Best Picture. Baumbach looks good in screenplay and director, too. Driver is a main contender for Best Actor. His co-star, Scarlett Johansson, may be in Best Actress.

“Marriage Story” has another element to it, as well. Laura Dern, who was given a Lifetime Achievement Award last night, is almost a cinch to win Best Supporting Actress from “Marriage Story” as Johansson’s hilariously self centered attorney. I’m thinking that Dern may win a Golden Globe next month too for Best Supporting Actress in a TV drama, “Big Little Lies.” She stole the second season.

Baumbach and “Little Women” director Greta Gerwig, a couple in real life, presented Dern with her award in a very funny bit. Dern appears in each of their current movies, so they each introduced her, using the others’ speech. It was the first time they’ve really ever done anything together in public.

Earlier, when Baumbach won one of his awards, he cracked the best line of the night: “I’m 51, I put 44 on my resume, but I can play 12 with the right CGI. I’ve seen The Irishman.”

Nicest new people I met all night: Best actor nominee Andre Holland’s parents, Mary and Don, who came up from Birmingham, Alabama. They are African American in a state that doesn’t necessarily appreciate them historically. I asked if they’d ever considered moving north. They each shook their heads. “Oh, no,” they said almost in unison. “We wanted to stay and fight.” Mrs. Holland added, “It’s not so bad.”

The Gotham Awards were sponsored by Robert Hall Winery, and everyone seemed to enjoy the vintage a lot!

Awkwafina
The Farewell (A24)