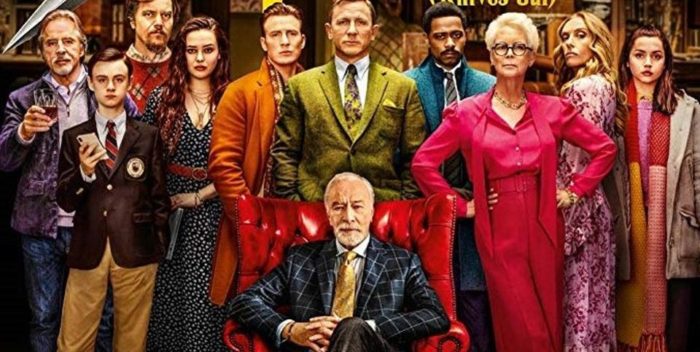 That’s Craig, Daniel Craig. And he’s starring in Rian Johnson’s hilarious “Knives Out,” which just made $2 million in previews over the weekend and opens officially on Wednesday.

On Saturday, Craig, Johnson, and co-star Michael Shannon appeared at a private screening of “Knives Out” followed by a lively Q&A and a cocktail reception. Craig, who always seems like he must be 8 feet tall, is actually a compact man of around five foot ten, built more solidly than Trump’s would be wall. He wore a tweedy three piece suit and tie, very natty, perfect for his “Knives Out” character Benoit Blanc, the Hercule Poirot of this murder mystery. Craig, who’s English, speaks with a perfect Southern accent as Benoit attempts to solve the puzzle of how very successful mystery writer Harlan Thrombey — played by Christopher Plummer — has died in his New England mansion. The suspects include his entire family and his caregivers.

But let’s cut to the chase. What we really want to know about is Craig’s final Bond movie, “No Time to Die,” set for release next April. As we shook hands, I said, “How’s Adele’s song?” Right? Good move, I thought. As I reported (and the Daily Mail helped it self to) Adele is likely to reprise singing the Bond theme song.

“Adele?” Craig said. “Who’s Adele?” Then he blinked and said, “You’re not getting anything out of me!”

I responded: “Let me ask you this, are you at least happy with the way the movie worked out? It’s your last one.”

Again: “Very nice, but no, I can’t tell you anything. I’ve got nothing!” He added: “It’s nice to see you!” His British publicist echoed that statement, and cut me off.

I tried, at least.

During the Q&A, everyone discussed the house “Knives Out” was shot in. It’s a real house in Massachusetts, and the cast set up shop there. Craig said, “Even though everyone had mobile homes of their own to retire to, everyone kept coming up to the house and hanging out.”

Shannon added: “Jamie Lee Curtis set up shop there.” Jamie Lee plays Harlan’s eldest child, a hard-edged successful businesswoman in her own right. “She was making soup, and cooking, all the time in the kitchen. It was funny to see her going back and forth from her character to Jamie Lee, the mother hen.”

Will Benoit Blanc return in a sequel? I don’t know if even Rian Johnson knows that, but I hope so. And with “No Time to Die” done, Daniel Craig has plenty of time to investigate another murder.