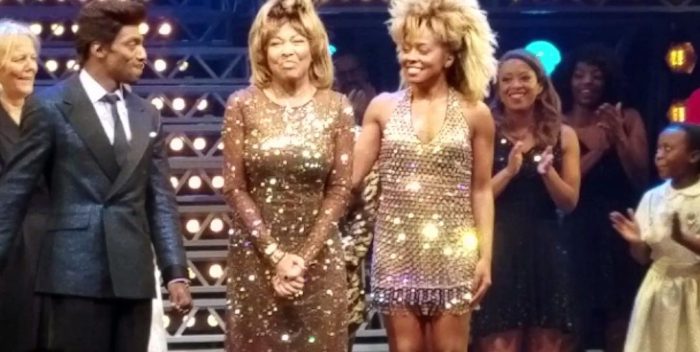 It was a great night on Broadway at the Lunt-Fontanne Theater for the opening of “Tina!” the musical about beloved legend Tina Turner.

Tina was accompanied to the show by Whoopi Goldberg and Oprah Winfrey. When they all walked in, after the entire audience was seated, there was a standing ovations and shouts of “We love you, Tina!”

Then, halfway through the show, when Adrienne Warren as Tina finished singing “River Deep, Mountain High” there was a standing ovation. That is something you do not see very often, if at all. (Glenn Close got one in “Sunset Boulevard.)

Warren, who was the toast of London when she debuted the show there in the West End, is simply a knockout. I can tell you now, this is a not-to-miss performance. She is sizzling on stage performing all of Tina’s famous dance moves to perfection, shimmying as if her life depended on it, and singing as if she’s channeling the great Turner and making the performance her own at the same time.

I didn’t realize until the intermission that I was seated right behind Warren’s parents, a lovely couple from Virginia. They’ve been watching this little phenomenon all her life. I asked Mrs. Warren, did your daughter sing a lot as a toddler? “We had to give her a 9pm curfew, no more singing!” was the answer. “And even that didn’t stop her!”

Mr. Warren, at the end of the show, looked like he needed a daybed and a scotch. He was so wrung out and happy for Adrienne.

Record biz mogul Tommy Mottola and his wife Thalia sat behind me and couldn’t stop raving as the show went on.

Of course, “Tina!” is not perfect. The one place where it falls down is the actual script, which is based on Kurt Loder’s famous bestseller with Turner from the late 80s– “I, Tina.” That book became a template for the movie that followed, “What’s Love Got to Do With It?” and for this show, whether credited or not.

Tina’s story is probably as well known as Spider Man’s at this point: poor family in Nutbush county, Tennessee, abandoned by a mother took her older sister and split for St. Louis. Tina is raised by her grandmother until the mother calls and asks for her to be sent to stay with her. In St. Louis, Tina finds her voice and meets Ike Turner, who’s a southern R&B star, already credited for making “Rocket 88,” the first rock and roll record.

But as we all know, Ike has a bad temper that only gets worse, and beats Tina, terrorizes her, and carries on for 16 years. She finally escapes after a gig in Las Vegas, and must start over. In the early 80s she hooks up with manager Roger Davies, who puts her back on the map with “What’s Love Got to Do With It” and her career explodes. She marries Erwin Bach, her A&R guy in Europe, and eventually retires to Switzerland.

What isn’t mentioned is that in the last year, since the show opened in London, one of Tina’s adult sons committed suicide.

“Tina!” has a terrific soundtrack, and director Phylidia Lloyd cleverly mixes Tina’s hits through the show even though they are not chronological. Most of them work, but the one that is kind of funny is “We Don’t Need Another Hero” from “Mad Max Thunderdome.” It’s a strong-sounding anthem, but makes no sense lyrically. What the hell is a thunderdome? And why is it being sung about? Who knows?

There are lots of strong supporting performances, starting with Dawnn Lewis, whom you’ll remember from “A Different World,” as Tina’s mom, and Daniel J. Watts as Ike in a thankless role, but he’s very, very good. Mars Rucker is excellent in the ensemble and as Tina’s sister, Aileen.

Don’t miss the ending– because they can’t fit in the show, we get two Tina concert performances that will blow you away.