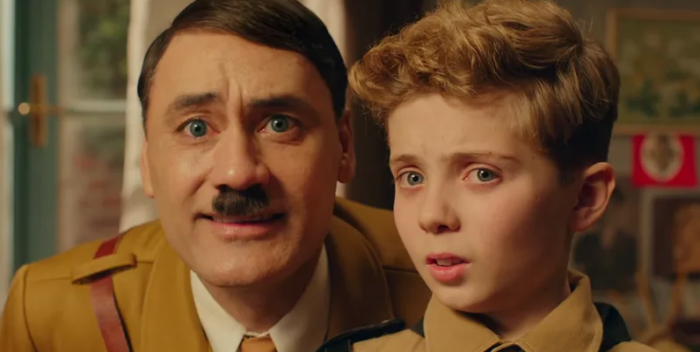 It’s not easy out there for some quirky films to find audiences.

“Jojo Rabbit,” the Hitler satire, made as much money on Monday in 55 theaters as it did the previous week in just 5 theaters. On Sunday October 20th, “Jojo Rabbit” took in $95,897 in those five locations. This past Monday, in ten times the number of screens, the controversial film raked in the same amount, less even: $94,026.

Fox Searchlight tells me many people have enjoyed “Jojo Rabbit,” a movie I did not like and cannot recommend. It’s a weirdly anti-Semitic misfire of a movie that’s supposed to “send up” Hitler. Twitter members seem to like it, but the actual audience that has viewed “Jojo Rabbit” this week doesn’t endorse it. On Tuesday, their box office had the lowest increase from Monday of all current films.

I can’t imagine what regular people think when they’re sitting through the litany of anti-Jewish tirades that take up the first half of this movie. The argument for “Jojo Rabbit” is that the main child eventually disavows all this, learns that his imaginary friend, Hitler, is evil, after befriending an Anne Frank-like character. Uh huh. Well, I don’t have that much patience. I doubt word of mouth is sending people to the theater.

Elsewhere, Bruce Springsteen’s “Western Stars” is pretty much done at the box office. After a huge Friday night with $650,000, “Western Stars” has more or less collapsed. So has Kanye West’s “Jesus is King.” Only  35 minutes long, or sort, “Jesus is King” lost two thirds of its audience after the weekend. Again, Kanye’s movie, like Bruce’s, had a big Friday and then a steady fall off. But both albums, “Western Stars” and “Jesus is King,” are selling well. And that’s what this is all about.