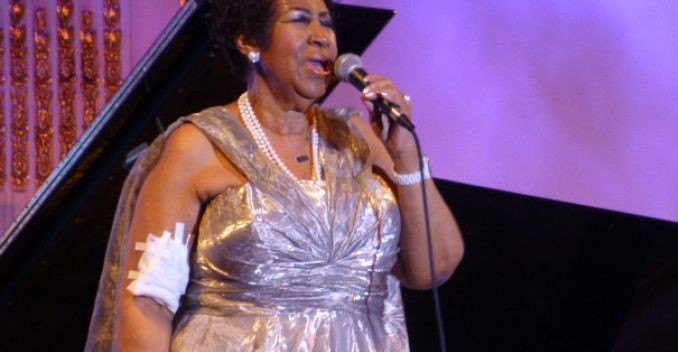 Yes, there are two Aretha movie projects. One of them is for the big screen, one of them for the TV. They are happening simultaneously. Why not? This mess is so Aretha, it’s just about perfect.

Today MGM announced the cast for “Respect,” directed by theater director Liesl Tommy and written not by Oscar winner Callie Khouri. Back in May, at the Pulitzer Prize lunch, I was seated next to Tommy and a woman named Tracey Scott Wilson. Tommy introduced her as the writer of “Respect.” This was a surprise since Khouri, famous for “Thelma and Louise,” has always been the credited writer. But Wilson and Tommy have worked before together off Broadway. Wilson’s screen credits are 1 episode of “Fosse/Verson” and 7 of “The Americans.”

Then there’s the “Genius” mini-series from Ron Howard’s Imagine for the History/Discovery channels. Clive Davis is an executive producer of that project, and he said in this space a couple of weeks ago that the scripts are in, and the show is moving forward.

There’s a big irony here about casting Aretha. Cynthia Erivo, Tony winner for “The Color Purple,” is playing the great singer in the mini series. Erivo’s Oscar winner (“Dreamgirls”) co-star from “The Color Purple,” Jennifer Hudson, was hand-picked by Aretha for “Respect.” Hudson has been an artist of Davis’s at J Records, and now at RCA, for years and years.

Aretha, of course, caused this problem. She refused to sign the papers for the movie before she died. How do I know? I asked her. As with her will or lack of one, she left the whole situation to chaos. “Respect” has been set for next August, on what is considered the “black film” release weekend. “Genius” will have to wait now unless they rush it into production. But it will come, the train has left the station.

We don’t have  cast list yet for “Genius,” but we do for “Respect,” which commences shooting November 1st. It’s a little, uh, odd, although I kind of like the idea of Marc Maron as Jerry Wexler. Even though Titus Burgess is very entertaining, he’s an offbeat choice for James Cleveland.

The list provided today indicates some idea of what the screenplay is concentrating on, Aretha’s Atlantic years (there’s no Ahmet Ertegun yet but there will have to be). Having Dinah Washington, Clara Ward, and Revs. Franklin and Cleveland, sounds like this is going to concentrate on Aretha during her Atlantic chart years, with the “Amazing Grace” concert maybe at the end-ish (1972).

What will it be like? The only things certain in this life are death, taxes, and Jennifer Hudson’s voice. JHud will sing herself into the heavens. That part will be insanely good. The rest, we will wait and see.

PS I am imploring all press to stop using photos of Aretha from the last year of her life. She was gravely ill, and looks it. This is not the image she would prefer, I can tell you that.

Here it is, from the press release:

The Franklin family will be played by:

Forest Whitaker (Godfather of Harlem) stars as Reverend CL Franklin. Known as the man with the “Million-Dollar Voice,” Franklin served as the pastor of New Bethel Baptist Church in Detroit, Michigan. Franklin was also the father of the American singer and songwriter Aretha Franklin and her manager early on in her career.

After a worldwide casting search, the role of young Aretha Franklin will be played by Skye Dakota Turner (Broadway’s Young Anna Mae in Tina: The Tina Turner Musical).

Music legends will be played by:

Tituss Burgess (Dolemite Is My Name, Unbreakable KimmySchmidt) stars as Reverend Dr. James Cleveland, who was known as the “King of Gospel.”