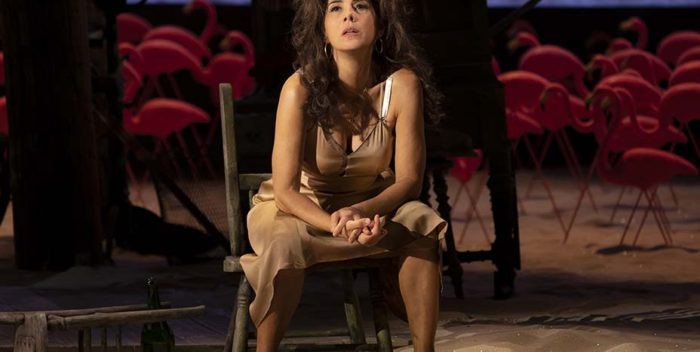 I am flummoxed by the new revival of Tennessee Williams’ “The Rose Tattoo,” which opens this week with Marisa Tomei as the sexy, confused Italian widow Serafina. Tomei, who has a long theater resume, knows what she’s doing. But she’s the only one. Rarely have I seen a star go one way and the production go the other way in a piece that is well known to everyone at least in theater.

You hear the name Tennessee Williams and you don’t think “slapstick.” There’s humor in “The Rose Tattoo,” and Serafina can be daffy and sassy, but Lucy Ricardo? No. Director Trip Cullman, who did fine work reviving “Six Degrees of Separation” and “Lobby Hero,” has just misunderstood this play completely.

Serafina is a Sicilian transplanted to the Gulf Coast of Louisiana in 1951. She sings the praises of her husband, a truck driver, as a great lover and partner. But he dies, and she learns he’s been having an affair. (It’s unclear in this version how long this takes– a few days or years.) She’s left with a 15 year old daughter who wants to lose her virginity. That’s Act I. In Act 11, a hunky younger truck driver wanders into Serafina’s seamstress business, and they fall for each other.

None of this is particularly funny, but someone has told the actors to “sell it.” The whole tone is off, and it’s almost impossible to follow what’s going on in the first act. Tomei is working, working, working. She is gorgeous and smart. But it’s like herding cats. She can’t get the cast on the same page, and neither can Cullman. Working against them is an extremely odd set. It’s inside, outside, who knows? In the distance on video is supposed to be the Gulf, but this Gulf has waves like it’s Ditch Plains beach in Montauk. A surfer could float in at any minute. Plus there are children running around constantly. Is there a daycare center nearby?

More even than George Costanza, I am such a fan of Marisa Tomei. See this production just to see her. But don’t hope to learn anything much about Tennessee Williams. This streetcar has too much graffiti.