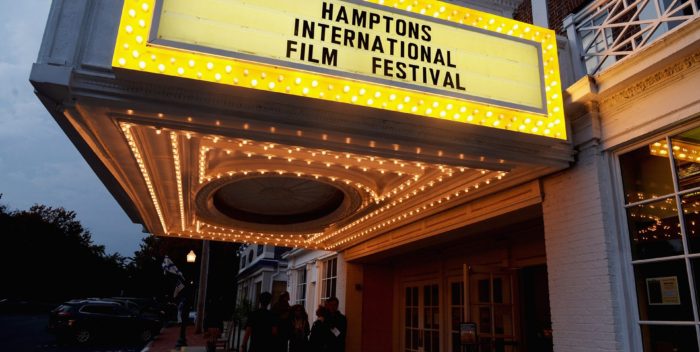 Here are some quick notes on the Hamptons International Film Festival, which has had a heavy schedule of good films and conversations despite raw weather and quality celebrity guests..

This year’s HIFF has impressed. “The Irishman” caused long lines on Friday and seemed to soak up a lot of attention. But an indie film that has no distributor yet, “Human Capital,” proved to be a sleeper hit. A kind of omnibus story with connected character, the Marc Meyers directed, Oren Moverman written movie is a crowd pleaser. Once again, Maya Hawke, 19 year old daughter of Uma Thurman and Ethan Hawke, lights up the screen and steals the show from excellent elders like Liev Schreiber, Peter Sarsgaard, and Marisa Tomei. The two younger guys in the story, Alex Wolff and Fred Hechinger, are equally good. This is a perfect February-March release. Hello, Bleecker Street, Neon, Focus.

In a more serious note, audiences were moved last night by “The Song of Names” from Sony Pictures Classics. Coming out December 25th, the music branch must nominate Howard Shore for a gorgeous score that took two years to compose. “Song of Names” is tangentially a “Holocaust movie” produced by Robert Lantos and directed by Francois Giraud (“Red Violin,” “Boychoir”). Forget that idiotic “Jojo Rabbit.” This is the real deal. Our Regina Weinreich will have a longer piece on this in days to come.

HIFF has had lots of nice parties, and conversations with filmmakers also including a talk with Alfre Woodard, star of “Clemency.” Alfre is certainly on the list for possible Best Actress nominees this year. Alec Baldwin interviewed legendary director Brian DePalma at Guild Hall, and DePalma’s 23 year old daughter Piper– named for actress Piper Laurie, star of DePalma’s “Carrie”– presented him with HIFFs Lifetime Achievement Award. DePalma’s long list of great movies is stunning in clip reel. From “Carrie” to “The Untouchables” to the first “Mission Impossible” movie and all his great quirky films like “Dressed to Kill” and “Body Double,” what a resume!

DePalma certainly had a good time, too. He, Woodward, and Baldwin among others turned up later in the day at Silvercup Studio owner Stuart Match Suna’s glittering annual gathering in East Hampton, where the canapes were good but secondary to the smart talk.