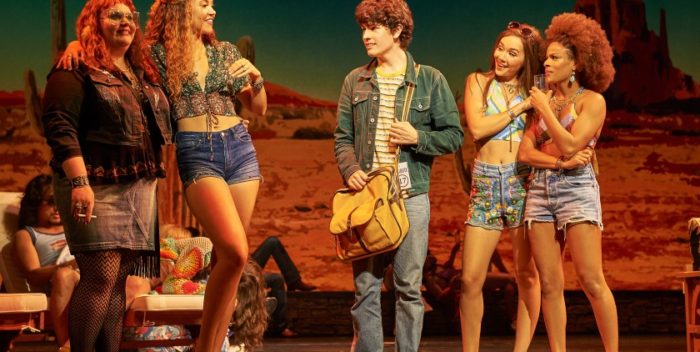 Broadway actor Colin Donnell has lately been playing a doctor on “Chicago Med.” That is, until they sent him away during the series opening this past week.

Why did he leave? Well, Donnell opened two nights ago in San Diego at the Old Globe Theater in a pre-Broadway tryout of the musical, “Almost Famous.” And it is a hit. The show is getting raves, which means “Almost Famous” will be coming to Broadway for Tony season this spring barring any curve balls.

Of course, “Almost Famous” is based on one of my favorite all time movies, from 2000, written and directed by Cameron Crowe. It’s the story of Crowe’s life as a teen rock journalist for Rolling Stone. Kate Hudson, Billy Crudup and Patrick Fugit starred in the film.

The musical stars Donnell as rock star Russell, the Crudup part. A new actress named Solea Pfeiffer apparently rocks as Penny Lane, the “muse” for the band in the show called Stillwater. Casey Likes is getting great notices as the Crowe substitute, William.

I wrote about this musical some time ago. I said I hoped there would be a song called “Rock Stars Have Kidnapped My Son.” Apparently, there is something like that written by Tom Kitt, whose 20 songs are also being praised. Plus they do sing Elton John’s “Tiny Dancer” on the road bus, just like in the movie. Britain’s Jeremy Herrin (a Tony Award nominee for the “Wolf Hall” plays) is the director. The inimitable Derek McLane did the sets, said to be terrific.

This is really great news, for Broadway, for Cameron, for us. For Colin Donnell, a Tony would be a sweet reward after working very hard. I remember him in “Anything Goes” with Sutton Foster.

PS No less a formidable presence than Joni Mitchell traveled all the way to San Diego to be at the premiere. This is not easy for her. By coincidence, I want to tell you that a coffee table book called “Morning Glory on the Vine” is about to be released by Joni, it’s a compendium of her early watercolors from the 70s. I just received a copy, and I can tell you her fans are going to go crazy. Painting is just one of Joni’s many successful disciplines. This book is really a gift.