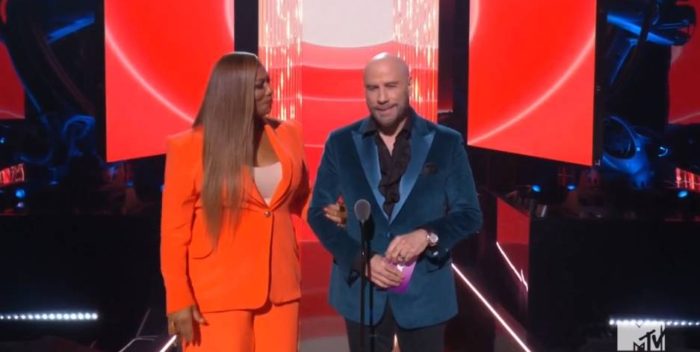 The MTV Video Music Awards were the usual circus tonight, but kind of tame. They were like a VR of the VMAs, artificial and harmless. The only tricky moment at the podium was John Travolta, looking like Barney the Purple Whale, dropping curse words. He’s so cool. (Oy.)

Lil Nas X won Best Song for his 19 week number 1 hit, “Old Town Road.” He picked up the award in an outfit so red he could go right into “Moulin Rouge” on Broadway. He’s pretty amusing, actually, unraveling a big scroll that he claimed would be his speech. But he just said, Thank you.

Taylor Swift, on a campaign to win over everyone, won Best Video for “You Better Calm Down.” The video won two awards, and Taylor brought her Rainbow Coalition to the stage. She hugged drag queens. She’s worked this demo beautifully. Taylor will be Governor of Pennsylvania in 15 years. Bet on it.

Best performance: Miley Cyrus appeared on the VMAs for the first time since her twerking scandal in 2013. This time, she showed a new maturity and sang the hell out of “Slide Away.” It was a stellar performance, showcasing her remarkable voice.

My personal fave: HER, aka Gabi Wilson. She couldn’t have been better. Expect big things from her in the coming year.

Much of the show still looks like it’s in a strip club. Most of the performances are lip synched. Nothing about the VMAs should be taken seriously. Just fun for an end of summer Monday night. Can’t hurt you.

VIDEO OF THE YEAR

Taylor Swift – “You Need to Calm Down” – Republic Records

ARTIST OF THE YEAR

SONG OF THE YEAR

PUSH ARTIST OF THE YEAR

The Chainsmokers, Bebe Rexha – “Call You Mine” – Disruptor/Columbia Records

Taylor Swift – “You Need to Calm Down” – Republic Records

SONG OF THE SUMMER, presented by Samsung