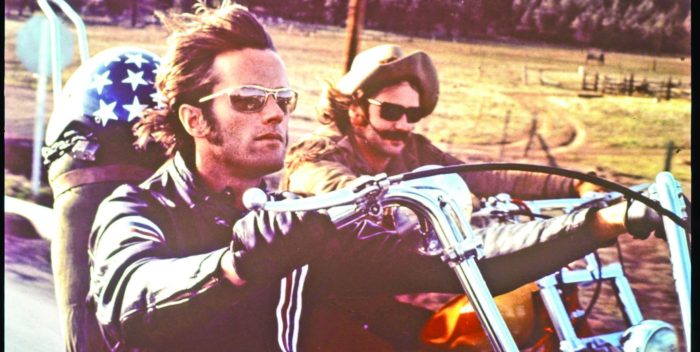 Peter Fonda has died from lung cancer today at age 79. It was only last month that his cornerstone movie, “Easy Rider,” celebrated its 50th anniversary. Fonda wrote it (with Terry Southern and Dennis Hopper) and directed it, and most importantly conceived “Easy Rider.” Ironically, it premiered three weeks before the Manson murders.

And even though it’s not mentioned in Quentin Tarantino’s “Once Upon a Time in Hollywood,” “Easy Rider” is the movie that represents the world that Rick (Leonardo di Caprio) and Cliff (Brad Pitt) see taking their place. Fonda — maybe in a quest to impress his movie star father, Henry — took a sledgehammer to the Hollywood establishment. Nothing would ever be the same.

Peter never stopped working after the success and upheaval caused by “Easy Rider.” He starred in and directed a lost gem called “The Hired Hand.” Like “Easy Rider,” it was partly designed to establish himself in Hollywood, and not just a little to impress Henry. (After all, sister Jane was just then winning her first Oscar, for “Klute.”) He wrote on Twitter earlier this summer: “My father wept when he saw The Hired Hand. Can’t get a better review than that.”

Over the years, Peter never stopped working, and went from film to film. His two outstanding performances in later years were in Steven Soderbergh’s “The Limey,” and in Victor Nunez’s “Ulee’s Gold,” for which he received an Oscar nomination for Best Actor. He won the Golden Globe for that performance, and was nominated for a SAG Award, as well.

Like Wyatt, Peter Fonda was himself the epitome of cool. He was just like his sister, Jane, and father: articulate, funny, and really smart. He was also incredibly generous. Back around 2001, I wanted to interview Richard Widmark, a Hollywood legend. No one had talked to him in a while and he was living in Connecticut with his second wife, Susan Blanchard. By coincidence, Susan had been the third wife of Henry Fonda. Peter considered her his mother (his and Jane’s mother, Frances Seymour, had committed suicide when they were young.) Peter called Susan on my behalf, and soon I was in Richard Widmark’s living room. I’ll never be able to thank him enough.

Peter’s death is certainly untimely and way too soon. He was planning a big 50th anniversary concert and screening at Radio City Music Hall next month. Last May he was invited to Cannes for the anniversary as well. He’s part of an all star cast this October in a film called “The Last Full Measure.” And of course he leaves a devastated family including sister Jane and daughter Bridget. I will really miss running into him “on the circuit,” where he was always grinning, expansive, full of stories, and laughs. He will be sorely missed.