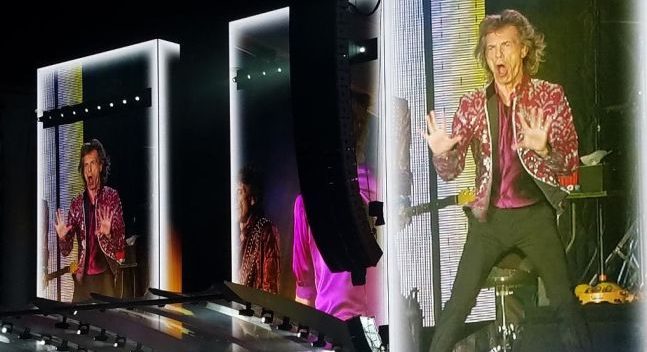 Thursday night at what I call Giants Stadium (MetLife, who knows, New Jersey Meadowlands) Mick Jagger and the Rolling Stones were on fire, my friends.

Their return to our local stadium filled all the seats and then some. There wasn’t an open spot anywhere as the Stones– now in their 57th year– roared into town and literally made history with a show that didn’t seem possible. 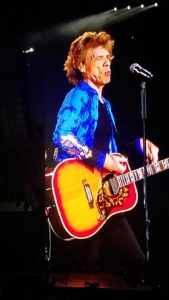 Jagger, just 76, despite a heart valve replacement only a couple of months ago, commanded the stage as if it were 1965. Lithe, bouncy, muscular, athletic, he led the storied group– not just the great rock and roll band but also maybe the greatest punk band, blues band — through a two hour show the audience will be talking about the rest of their lives.

Not just Jagger, but Keith Richards, Ronnie Wood, Charlie Watts, the whole back up band, gave one of the tightest, hottest, tastiest performances of their lives. From “Street Fighting Man” through “Satisfaction” they never let up, they never let us down, they played with a sweet fury. These are ancient mariners now, but you’d never know it.

And no one can touch them. Not Bruce, not Paul, not U2, not anyone. And those guys are at the top of their games, don’t forget. But to see Mick prance, dance, sprint, move like James Brown, Tina Turner, and Michael Jackson, actually move like Jagger, it’s like watching the 8th wonder of the world. How does he do it? Does he have an avatar? Several. It’s almost like he’s determined to defy the odds.

The Stadium was filled, on the floor, in the sections above. Jagger dances out on a long runway to looks like it might be a riff on the group’s tongue logo. He’s an effervescent cheerleader, blues singer, and mirth maker. Sympathy for the devil? We’ve got plenty.

Every night the set list changes. So we got “Street Fighting Man” at the beginning, “Jumping Jack Flash” at the end. We also got a treat, a rare “She’s a Rainbow,” chosen on line by the audience. (Mick said, explaining the song’s new popularity: “Well, it’s been in a lot of commercials,” then asked if anyone in the band remembered how it started. “It’s from 1967,” he said. Luckily, Chuck Leveall was ready with the keyboards.) 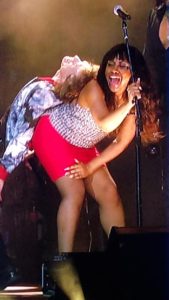 You can only have 17 or 18 songs. The Stones catalog of hits people want to hear is four times that number. You’d think, too, these guys can’t want to play these songs again. But they do, and tonight the special treats were Keith kicking ass on a bravura “Jumping Jack Flash,” then leading “Brown Sugar” well beyond its boundaries. The unexpected centerpiece of the night was “Midnight Rambler” in which everyone got a place to shine, and to mine the depths. Ramble they did.

Richards is still a modern medical miracle. He’s almost like a science fiction project gone right. And when he plays those chords, or digs deep into his steely blues, there’s nothing else like it. No one is enjoying themselves more on stage than Woods– his grin is infectious. Watts plays it sober. He’s 78, and remains unruffled as he pounds those drums into ecstasy. The rest of the group  — Chuck Leavell, Darryl Jones, Bernard Fowler, Sasha Allen, Tim Ries, Matt Clifford, Karl Denson– are killers in their own right.

This is midpoint in the Stones short tour. They have one more show here on Monday, then a few more around the country. This is not to be missed, although I worry about Jagger self-immolating or sprouting wings and flying away at the end. The whole thing isn’t possible, and yet here it is. Don’t miss it.