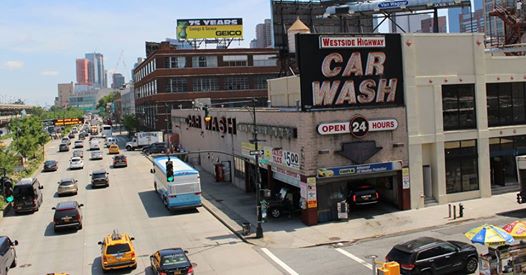 I was pretty shocked last night when I realized the West Side Highway car wash has closed after over 70 years. With its brilliant neon sign, the Car Wash has been a landmark at 46th Street, a bustling hub of human activity 24 hours a day. It was a signal of New York’s now- lost slogan, “The city that never sleeps.”

The city has been killed in its sleep.

Greedy developer MKF Realty has bought the building that houses the Car Wash and the building next door. In the terrifying trend to destroy the west side (see Hudson Yards) with suburban glass structures and malls, MKF is planning some antiseptic complex that no one will ever use, and will be devoid of human life. According to the Real Deal, MKF spent $69 million to accomplish this feat.

Forget about the fact that on the West Side, we have almost no gas stations or car washes. Supermarkets are also disappearing. All that’s left are these large glass boxes, and zillion dollar condominiums. Why would anyone want to live in a city with no quirks, no small buildings, odd shops, and history? Just to stay at home and watch Netflix and order from Amazon or Uber Eats? That is not a city. That is hell.

Meantime, it looks like The Paris Theater across from the Plaza Hotel will close this summer, also after 70 years. The Paris Theater is the last free standing single screen movie theater in New York. The developer, Sheldon Solow, will probably invite a Sephora or a bank to take the space. The Paris, also with its famed neon sign, was a beacon of art and sophistication that made Grand Army Plaza iconic for people around the world.  It was also the only theater left to showcase fine independent and foreign films. But Solow, like so many other greedy, artless people before him, is eager to kill the New York we knew and loved. Disgusting. Apparently his son, named Stefan Soloviev (he took the original family name) is behind all this. He will watch blockbuster films on a huge home screen and laugh at all of us. Beautiful.

Jeremiah’s Vanishing New York website–the best for New York history updates– reports that Union Square’s Coffee Shop, which closed after almost 30 years, will mostly be replaced by a Chase Bank. What’s left will get a chain deli like an Au Bon Pain or Pret a Manger. You just want to throw up. Coffee Shop’s rent was raised so high they couldn’t stay. Their sidewalk cafe was one of the thrills of the “new” Union Square after the park was lowered and life sprang from it.  Aside from the Farmer’s Market, the west side of Union Square is becoming a dead zone.

Elsewhere: up and down Sixth Avenue from Houston to 14th St. there are long stretches now of empty retail space. It’s like an episode of “The Walking Dead.” All the places where life congregated are being wiped out. Some idiot bought the building at Carmine and Bleecker and closed the beloved 50 year old Spaghetto Trattoria. The whole block on the east side of Sixth between 8th St. and Washington Place, which once housed Barnes & Noble/B Dalton and Duane Reade, is empty except for the 99 cent pizza place and Grab & Go over the subway entrance. The big digital clock on top of the building, also a beacon, is long gone.

Up at the corner of 14th and Sixth, something really sinister is going on. The beautiful art deco bank building on the northwest corner has been leveled. Across the way, where Moscot Eyeglasses’ yellow and black sign indicated signs of life, that building is also coming down. In their places will be more luxury condos. And so on and so on and so on. A lot of people blame Mike Bloomberg for all this. DeBlasio, however, has carried out the destruction of New York very well on his own.