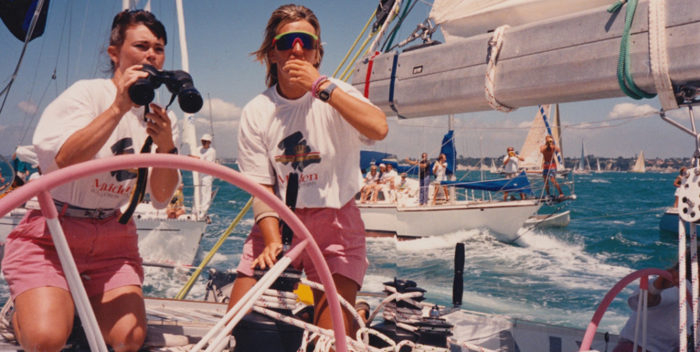 Here’s the deal on “Maiden,” an extraordinary documentary that sets sail for the Oscars beginning tomorrow in limited release and will go wide over the summer. Tracy Edwards is sort of the new Philomena, a real life heroine who organized the first ever all female crew to compete in Britain’s Whitbread round the world race back in 1989-90.

Once you’ve seen her on screen now, and from the miraculous film that survived from her unique triumph, Tracy is going to be a star. So will her crew, including her pal Jo Gooding, who filmed the whole adventure nearly 30 years ago without any training. Filmmakers at a screening and reception this week for “Maiden” were completely impressed with Jo’s work back then. This tiny woman was completely bowled over by the compliments.

“I just took the camera and shot everything,” she said humbly. “I couldn’t imagine it would become a feature film.”

Director Alex Holmes retrieved all the footage that had been discarded, plus conducted new interviews. Sounds simple, but it wasn’t. And Holmes’s real achievement is in the story telling. The film is dramatic and exciting, and begging for a major motion picture version.

“Maiden” has a surprise hero at its center, too: King Hussein of Jordan. You’ll have to watch the film to learn how he and Tracy hit it off, and Royal Jordanian Airlines came to sponsor the Maiden trip. Three decades later, King Hussein’s daughter, Princess Haya, helped Edwards buy back the original Maiden, clean it up, and send it on a worldwide tour supporting education for young women. Queen Noor (who is not Haya’s mother) sent a message of congrats that was read at our screening.

Who would Tracy like to see play her? Most of the night, the guests–including Oscar winners Barbara Kopple and Karen Goodman, “Veep” actress Margaret Colin, the great Carol Alt, and the evening’s host, Whoopi Goldberg— were taking stabs at names. When the women went on this death-dying trip around the world in a sailboat they were between 27 and 30. Now they’re between 57 and 60. Studios are going to want to tell you the young women’s stories.

Every known actress on the imdb will want to be involved. But if Brie Larson and Saoirse Ronan are up for getting wet, this movie is for them. Danielle McDonald, too.

The word is that “big” Sony- aka Tom Rothman’s Sony– will make the translation since Michael Barker and Tom Bernard‘s Sony Pictures Classics is releasing “Maiden” now.

See this movie! I’m telling you now, “Maiden” will be that Oscar movie you can tell friends you saw this summer.