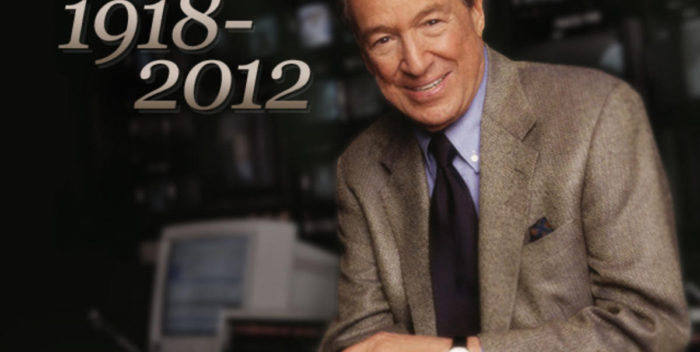 An A list crowd turned out last night at the Whitby Hotel on West 56th St. for Avi Belkin‘s powerhouse documentary about “60 Minutes” legend Mike Wallace. The 90 minute film is as breathless as Mike was, revealing the crusading journalist’s many triumphs as well as his troubled times.

Despite his bravura public persona, Wallace suffered from depression in his later years. Belkin shows a stunning interview in which fellow “60 Minutes” correspondent Morley Safer asks Mike if he ever considered suicide. Wallace confesses that he actually tried it, with pills, and that he his wife, Mary, found him passed out and had to call an ambulance. (Wallace wrote about it in his memoir, but this was the first time he’d spoken about it.)

Belkin covers Wallace’s famed lawsuit with General William Westmoreland over his Vietnam story about the number of troops during the war (Wallace and CBS won when Westmoreland, who wouldn’t pull out of Vietnam, exited the suit in disgrace). The film also details Wallace’s famous lawsuit following a story about whistleblower Jeffrey Wigand (which became the great Michael Mann movie, “The Insider”).

Belkin misses some things to keep the movie at a reasonable length. But what he gets right is Wallace’s early career as a commercial pitchman, his landmark interview show “Night Beat” (including remarkable interviews with Frank Lloyd Wright, Salvador Dali. and Thomas Hart Benton, among others), his trips to Vietnam and extraordinary coverage of Watergate.

There’s also film of Wallace’s trip to Greece, where he led a group (including a film crew) to find his son, Peter’s, body after a hiking accident at age 19. Wallace, who’d by then interviewed everyone in the world with cameras following him, now became the subject of the story. It’s heartbreaking, and Mike says in the film it changed his life. (There is very little talk, however, of his four wives, or journalist son Chris Wallace of Fox News. But I’m told Chris approved the movie. It couldn’t have been easy for him.)

CNN’s Wolf Blitzer led a Q&A panel after the screening with ABC’s Bob Woodruff and Axios writer/superstar Alexi McCammond. (More about that in my next story.)

Tony Danza was one of many bold faced names who came to see Belkin’s film. (The stunning film, sure to be on the Oscar short list, opens the last week of July.) Danza told me he had two connections to Mike Wallace. One, he interviewed Mike in 2005 on his own talk show. And two, he and his “Taxi” co-star Carol Kane once had dinner with the one and only Bette Davis in Los Angeles. (The cantankerous Davis’s interview with Mike Wallace is featured in the documentary.) She was a hoot, Danza recalled.

Tony Danza is 69, is a grandfather (of a 14 year old!) still radiates charm and looks 20 years younger. The star of “Who’s the Boss” and “Taxi” told me he went to see the legendary, beloved Mel Brooks on Broadway this past Tuesday night. (Mel did two solo shows, I see nothing about it in the papers or even a photo on the wires.) While we were waiting for “Mike Wallace” to start, Tony told Regis and Joy Philbin (they let me eavesdrop) Mel was hilarious, of course, then went backstage where he ran into Alan and Arlene Alda, among others.

Danza positioned himself perfectly to greet the 93 year old legend. “I ran right into him,” Tony said with a devilish smile. Danza played Max Bialystock in “The Producers” musical, he reminded Mel, in New York and in Las Vegas. Mel cracked, “Great performance, wrong show!” One night, Tony remembers, he heard Mel was coming to see him in the show. Tony put a friend in the audience, sitting right next to Mel, unbeknownst to Brooks. The friend had a copy of the script, and he marked it each time Brooks laughed. Now, that’s smart thinking!

It’s kind of amazing, when you watch this movie, you will realize how much Mike Wallace’s voice is ingrained in your memory. It’s almost like hearing great music you’d forgotten. He was the first TV journalist who went around kicking down doors, blowing up icons, looking for the truth, getting facts. He upset the placid apple cart at CBS News when he arrived, but then he and producer Don Hewitt made history in 1968 with “60 Minutes,” still the number 1 prime time news program after 51 years. Extraordinary.

PS My dear friend Liz Smith must be so pleased in heaven. She’s up there with Mike, whom he worked for in the 1950s before becoming the most famous gossip columnist. They were lifelong friends, and she promoted him (and Barbara Walters) in her columns endlessly. Their mutual admiration society was a media power bloc never to be rivaled!