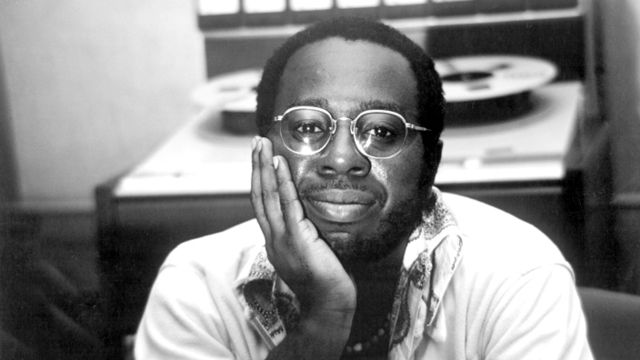 It’s actually even sadder now that I realize when Curtis Mayfield died at the end of 1999 he was only 57 years old. OMG. The great singer-composer-producer was a genius who still has not been adequately recognized. He would have turned 77 today.

Mayfield was paralyzed in August 1990 after a light tower fell on him during an outdoor concert in Brooklyn. His death was attributed to type 2 diabetes, but he suffered for nine years after that accident. And he actually produced one album in 1996 called “New World Order.”

But the huge legacy Curtis leaves are his songs with the Impressions, producing Impression Jerry Butler, hits with Major Lance, and then his own solo hits, producing Aretha Franklin.

Those songs include the immortal “People Get Ready,” “It’s Alright,” “Move on Up,” “Freddie’s Dead,” “Superfly,” and the songs from “Sparkle” like “Givin’ Him Something He Can Feel.”

Do yourself a favor– get a Curtis Mayfield greatest hits. There’s nothing better. Get Major Lance’s “Monkey Time” and “Um Um Um Um.”

Just recently, Mayfield’s family reissued four of his CDs as “Keep On Keeping On,” Curtis’s solo albums from 1970-74. The albums are all remastered, sound better than ever. Once you’ve heard the eight minute, thirty four second version of “Move on Up” you will never listen to current music again.

Here’s a shout out to Curtis’s widow and mother of his kids, the wonderful Altheida Mayfield, who’s kept his torch burning.