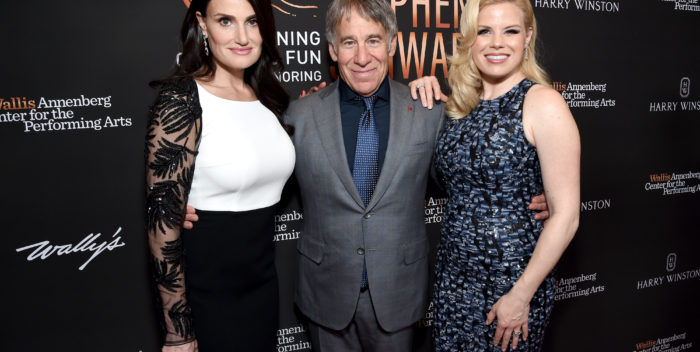 Stephen Schwartz, composer of “” Wicked,” Godspell,” “Pippin,” “Enchanted,” “The Prince of Egypt,” “Pocohantas,” “and so much more well deserves all the accolades he gets. His latest honor is near and dear to him. Wallis Annenberg, the noted philanthropist of many causes, founded the Center for Performing Arts in Beverly Hills. Schwartz didn’t need prodding to accept this honor. He told me that, “I get asked to do a lot of these, I pick my spots, and I picked the Annenberg. I really believe in what they do and proud they selected me.” What’s next for this prolific composer? “The most front burner thing is the stage adaptation of ‘The Prince of Egypt’ which is going to open in the West End of London in the beginning of next year. “

Idina Menzel, whose Elphaba in “Wicked” launched her career, before paid tribute to him by saying, “Having Stephen Schwartz in my life, well, it changed the trajectory of my life. It changed everything about me. I embraced the power and the beauty of a unique, fierce, incredible woman and to feel the calm in owning that and not apologizing for who you are.” Menzel also had a cute moment when as she started to wax poetic about Schwartz, she asked the piano player to vamp a bit so “I’m not alone out here!” She then sang her noted song, “Defying Gravity.”

Co-Chair Wallis Annenberg presented Schwartz with a $100,000 donation to the ASCAP Foundation, where he serves as the Artistic Director. She remarked that, “Stephen Schwartz once wrote this wonderful line, (referring to “Corner Of The Sky” from “Pippin”) that “People like the way dreams have of sticking to the soul.’ That is why we created this center six years ago. We all need dreams that touch us deep down inside, that stick to our soul, and that is why Stephen’s career has been so extraordinary, so iconic, because his stories, his compositions, his glorious works of art speak to the deepest emotions about who we are and who we want to be.” Stephen then played the evening’s closing number, his new song “Can You Imagine.” Wallis is right, Stephen defines the word ‘iconic.’