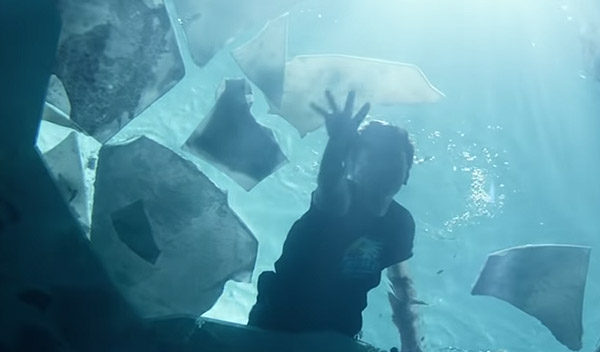 “Breakthrough” could be the first breakout crossover hit for Fox since it merged with Disney.  Opening today, this faith based film boasts basketball powerhouse Steph Curry as one of the executive producers.

Directed ably and affecting by Roxann Dawson, the film’s performances, story and music lift this film to a true tearjerker with a thankfully happy ending. “Breakthrough” tells the true story of John Smith (the mega appealing Marcel Ruiz) a 14-year-old Missouri boy who in 2015 fell through thin ice while horsing around with his friends.

Fifteen long minutes went by before he was rescued, but experts were convinced he wouldn’t make it as no one who’s been underwater so long ever did.  His devoted Mom, Joyce (sweetly and fiercely played by “This Is Us” star Chrissy Metz) prayed over him and restored his breath.  John was born in Guatemala and adopted as a baby by Joyce and her equally devoted husband Brian (Josh Lucas.) The cast also includes Topher Grace, Sam Trammell Mike Coler, Taylor Mosby and Dennis Haysbert, all who are terrific.

Even though we know the outcome, the film relies on faith, even though science could have played a role. The fact that he was in freezing water, which could have helped delay neurological disaster. But who knows?  A Mom’s faith along with the community’s prayers makes you feel uplifted and hopeful.  And hey, what’s wrong with that?

Ten time Oscar nominee songwriter Diane Warren wrote the powerhouse, “I’m Standing With You,” which Metz sings (which she just sang on the ACM awards) that is a genuine knockout and could garner Warren her 11th nomination.