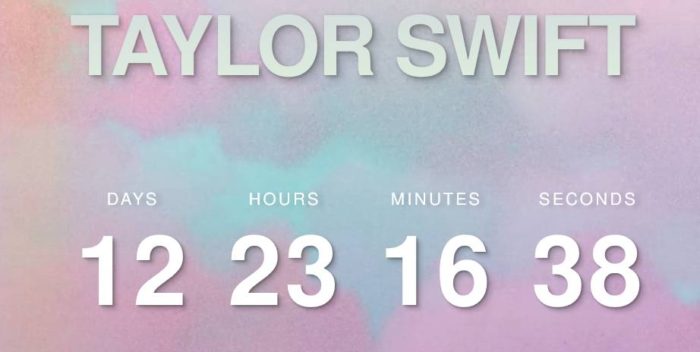 Taylor Swift is back.

She’s put a countdown clock on her website indicating April 26th as the time when she will deliver a new single, possibly.

It’s time for Taylor. She needs a big summer hit. Her last album, “Reputation,” was a hit, but nothing like its predecessor, “1989.”

Since then, Swift made a huge deal with Universal Music Group, leaving Big Machine– the little label that worked like a dog for her.

If she’s got a single the last week of April, an album may not be far off– say mid summer? That would put her on track for Grammy eligibility cut off of September 30th. Swift skipped this year’s Grammys entirely, after winning Album of the Year for “1989.”

And meantime, new female artists keep popping up. But Swift is the leader of her generation.

What would be nice: a new Katy Perry single. I still love “Chained to the Rhythm.” We need a summer ‘bracket’ of Taylor and Katy on AM radio!