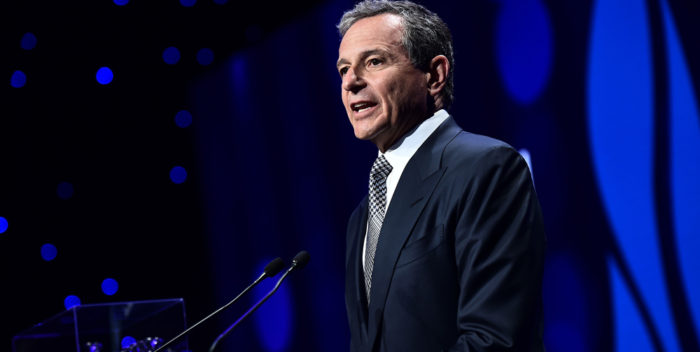 Disney chief Bob Iger pulled no punches about the state of the union as it is today as he accepted his 2019 Humanitarian Award at the Simon Wiesenthal Center’s annual tribute dinner this week at the Beverly Hilton.  “Hate and anger are dragging us towards the abyss once again, and apathy is growing.   It’s consuming our public discourse and shaping our country into something that is wholly unrecognizable.  Our politics in particular, are now dominated by contempt. “

Iger was one of four honorees at the event; the others received the Medals of Valor.  They were Florence Phillips, teaching English to immigrants, Kurt Kleinmann, whose late brother chose to accompany his father to Auschwitz rather than be separated and Rabbi Jeffrey Myers, the Rabbi of the Tree of Life Synagogue that was the site of a massacre.

Jimmy Kimmel emceed, (his boss is Iger) and noted of his time on the Oscars.  “The last time I was asked to host an awards show, that awards show decided it no longer needed a host, and the ratings soared. “  Jimmy did note that previous honorees were Harvey Weinstein (2015) and Les Moonves (2018.)  He quipped, “Let’s just say, mistakes were made!”

Iger never spoke Trump’s name, but it was absolute in the air.  “Hitler would have loved social media for its echo chamber effect.” He continued, “Maybe we should just start by reconnecting with those friends and family members that we haven’t spoken to since the 2016 election.  Whomever you support with your vote or money, make them earn it.  We have the responsibility to fix what is broken.  The world needs us to be better.  Each one of us has the obligation to be part of the solution.” The event raised a record 3.6 million dollars.