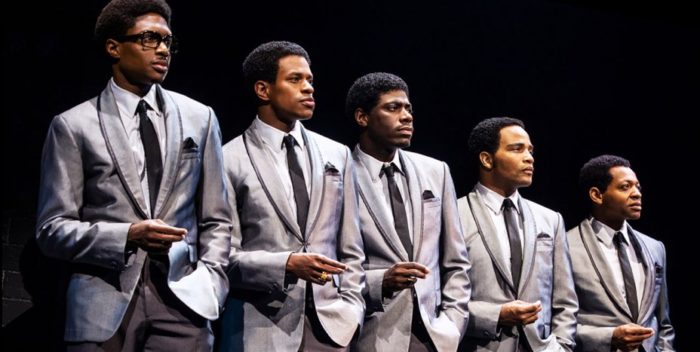 I told you about the Broadway show “Ain’t Too Proud” a month ago after its first performance. The story of the Motown group The Temptations opened last night to a wildly enthusiastic crowd despite a steady, heavy rain last night.

Motown founder Berry Gordy and all time Supreme Mary Wilson were among the guests in the audience to cheer on original Temptations member Otis Williams. He started the group in 1963, and the musical is based on his autobiography.

Dramatist Dominique Morisseau has fashioned a book that doesn’t always stick to the facts– let’s call them alternative facts– but she tells the story of the original members of the Temps starting with Williams and including Eddie Kendricks, David Ruffin, Paul Williams, Melvin Franklin, and Dennis Edwards. (Altogether there have been 24 members of the group, but those were always the main players.)

Otis Williams had to keep switching up the members as they succumbed to fame, fortune, and drugs. But it’s not a downer story because Ruffin and Kendricks were really superstars even after they left the Temps, and Dennis Edwards had one of the all time greatest pop hits still heard today constantly called “Don’t Look Any Further” once he exited the group.

But while they were Temptations they created the most popular R&B group in history, with hits like “My Girl.” “Papa Was a Rolling Stone.” and “Just My Imagination.” The musical showcases two dozen of them from the Motown catalog, and oddly includes a non Motown song “If You Don’t Know Me By Now,” from Harold Melvin and the Blue Notes, written by Gamble and Huff for their Philly International label.

The Motown music– mostly from Smokey Robinson and Norman Whitfield– is what propels the show. The orchestra, which is on stage behind the action, is sensational. And the actors are just knockouts. Derrick Baskin, James Harkness, Jawan M. Jackson, Jeremy Pope, and Ephraim Sykes are each headed to Tony nominations. Rashidra Scott and Nasia Thomas are no slouches either as Williams’ long suffering wife, and tragic Motown ingenue Tammi Terrell, who died at age 24 of a brain aneurysm. Baskin plays Otis, who can sometimes come off as a little self-righteous, but Morisseau does a lot to underscore that. Pope as Eddie Kendricks has real star power. And Ephraim Sykes as Ruffin may wind up being the breakout. You will never get tired of hearing Jawan Jackson’s bass baritone. Trust me.

It’s not a coincidence that “Ain’t Too Proud” comes at the same time as Motown’s 60th anniversary. A CBS special will air next month, taped in February right after the Grammy awards. That night, Otis Williams and Mary Wilson got short shrift– or no shrift– even though they were in the audience. But last night they basked in the limelight, and deservedly so. Gordy, who had to listen to some light criticism of him on stage, remains amazing at 88 years young (I mean, really, I don’t get it– he looks 20 years younger). No matter what, he made Motown into a genre of music. You can see it in this show. “Ain’t Too Proud” shows off a phenomenon.

SVZ with the Supremely gorgeous Mary Wilson. And my out of focus photo pic.twitter.com/ESRf8nZhDO