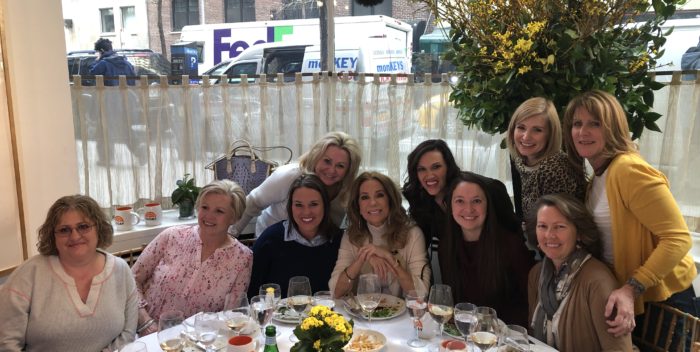 Kathie Lee Gifford is really leaving the fourth hour of Today with Hoda. No more chuggin’ back the wine at 10am.

It’s not unusual to run into Kathie Lee in New York’s media lunch hot spot, Michael’s, on West 55th St. But yesterday, KLG commanded the whole front bay window table with a group of ladies who were toasting her.

Turns out they were Kathie Lee super-fans. They’d entered a contest, and the winners were all flown in to hang out with their favorite TV presenter.

After they met Kathie Lee at the NBC studios, someone mentioned lunch. Kathie Lee put in a call to Michael’s a half hour before the restaurant opened. Us regular types would get a hearty laugh on a Wednesday, which is Michael’s peak dining day.

But KLG is a beloved regular. So Michael’s cleared the front table. Not only did all the ladies come, but also a film crew. Maybe we’ll see the results today at 10am.