EXCLUSIVE The Friars Club really likes its Executive Director, Michael Gyure. They’ve sent a letter to their members telling them that Gyure will now get the title of Executive Producer, forging new ties with the entertainment industry. “Obviously, Michael’s intricate knowledge of the Club will allow us to utilize his talents to make sure that the fraternal spirit and good works of the Friars is carried forward.”

Of course, first Gyure (pronounced, ironically, JURY) has to show up at his sentencing hearing in Federal Court on April 22nd.  In January, Gyure pleaded guilty in federal court to tax fraud. He agreed to pay $156,920 to the Internal Revenue Service and could face a maximum of three years in prison.

(Gyure admitted to failing to report $433,000 in compensation from 2012 – 2016. This included reimbursements and payments he used for personal expenses including wine, international travel for both himself and his family members, clothing and groceries. The Friar’s Club also forgave him of $160,000 in loans and the members were never told. In 2015, the club had to ask vendors to accept late or reduced payments. Gyure also failed to pay several hundred thousand dollars in state sales tax between 2015 – 2016, according to investigators.)

So, ok, maybe even from prison he can forge those ties with the entertainment industry. The letter to Friars members from the Board of Governors is chock full of hilarious bon mots about their 2017 raid by the US Postal Service and US Attorney’s office. They swear in bold, underscored type that there is no active investigation. Also General Manager Michael Caputo is stepping down. It’s just a coincidence.

The Friars is a registered 501 c3 charity and still hasn’t filed a Form 990 since June 30, 2015. They say they are now outsourcing their daily accounting activity to an outside firm– unnamed, of course–and claim that their failure to issue financial reports was because of the Department of Justice investigation. But of course, the investigation began in 2017. That doesn’t explain why there’s been no tax filing since 2015.

The Friars Club is basically a mess. Yesterday one member told me he was the only person in the dining room for lunch last week. The East 55th St. townhouse is empty, certainly devoid of any show business stars as in the past. They honored Billy Crystal lately, who did show up, but they also honored “Ronnie Shoes” or “Ronnie Copa.” Nistico was indicted and settled a case in 2004 for assault. The NY Post  reported then that Nistico had two prior arrests and convictions on weapons charges in 1990 and 1996.

The club is also recovering from settling $1 million on a receptionist who sued them and ad hoc exec Bruce Charet for sexual harassment. That is not mentioned in the new letter below. 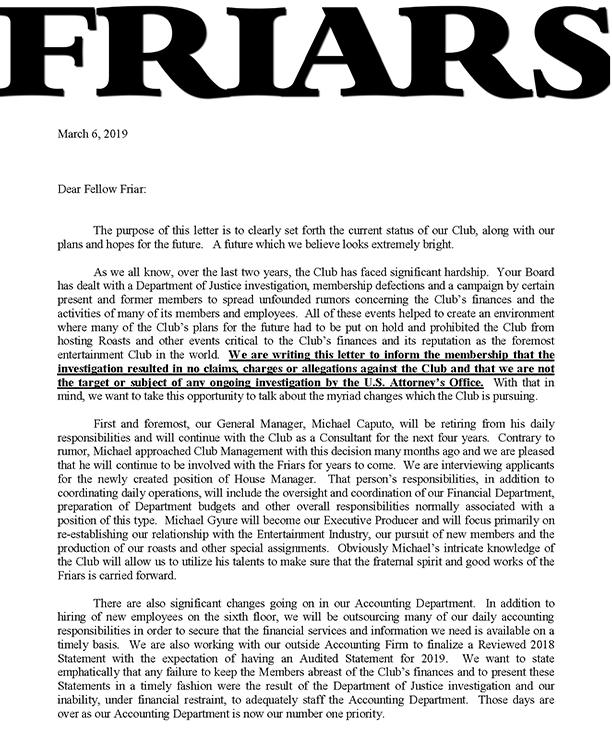 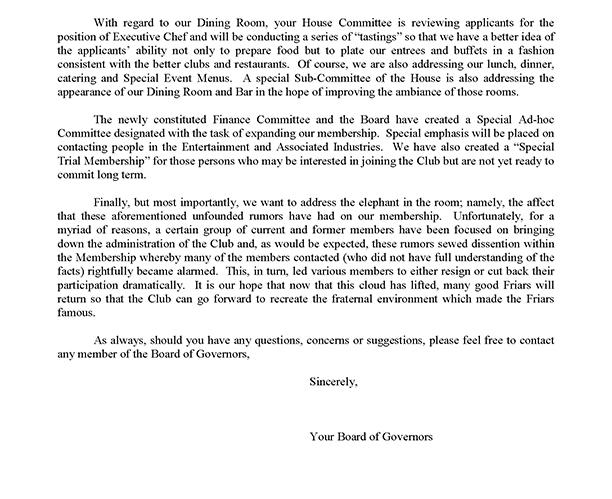