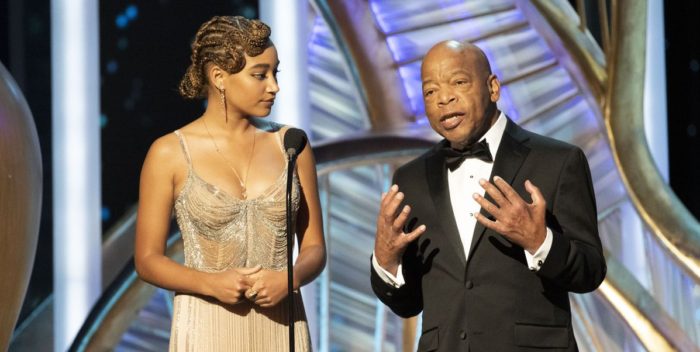 Donna Gigliotti did a kick ass job producing the Academy Awards. The show moved fast, the performances were all memorable, and no one noticed the absence of a host.

But they could easily have asked Tina Fey, Amy Poehler, and Maya Rudolph to host the show. They were phenomenal.

At some point in every Oscar show you know where things are heading. When “Green Book” won Best Screenplay, that was the first indication they had Best Picture. But also, when legendary congressman John Lewis came to present the “Green Book” clip, I knew the movie had won. You don’t just drag John Lewis to the Oscars for nothing. That’s no fluke.

I’ve been covering the Oscars for a long, long time. This was the most inclusive, multi-cultural it’s ever been.

The biggest surprise, of course, was Glenn Close losing to Olivia Colman for Best Actress. What does Close have to do to get that statue? I am hopeful she will make the movie musical of “Sunset Boulevard” ASAP. She will win hands down, trust me.

I spent quite a bit of time in the bar off the side of the stage. WHen Mahershala Ali won, there was thunderous applause. When Close lost there was a gasp that sounded like a wind tunnel. During Lady Gaga’s performance with Bradley Cooper, you could hear a pin drop. When “Green Book” won, there was cheering.

PS “Green Book” is a wonderful film. It’s an accurate memoir of a friendship between Tony Vallelonga and Don Shirley. The anger toward it is misguided and fabricated. They save each other, in the end. It’s exactly what a Best Picture should be– something that has a Big Idea. Would the naysayers prefer these two men had never met? It’s utterly ridiculous.

Performance by an actress in a supporting role

Achievement in makeup and hairstyling

Performance by an actor in a supporting role

Mahershala Ali in “Green Book” (WINNER)
Adam Driver in “BlacKkKlansman”
Sam Elliott in “A Star Is Born”
Richard E. Grant in “Can You Ever Forgive Me?”
Sam Rockwell in “Vice”

“BlacKkKlansman” written by Charlie Wachtel and David Rabinowitz and Kevin Willmott and Spike Lee (WINNER)
“The Ballad of Buster Scruggs” written by Joel Coen and Ethan Coen
“Can You Ever Forgive Me?” screenplay by Nicole Holofcener and Jeff Whitty
“If Beale Street Could Talk” written for the screen by Barry Jenkins
“A Star Is Born” screenplay by Eric Roth and Bradley Cooper and Will Fetters

Performance by an actor in a leading role

Performance by an actress in a leading role

Olivia Colman in “The Favourite” (WINNER)
Yalitza Aparicio in “Roma”
Glenn Close in “The Wife”
Lady Gaga in “A Star Is Born”
Melissa McCarthy in “Can You Ever Forgive Me?”

Best motion picture of the year